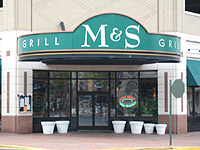 On Friday night, we went to the mecca of Green consumerism that is Reston Town Center and had tasty burgers at an outdoor table at American Tap Room. The restaurant was nearly empty inside, mainly because their air conditioning was set at Nipplify, and they also had their entire front facade opened up in order to cool down the outside street. We also walked around the Town Center a bit as a digestive aid and pondered the presence of M&S Grill right across the street from McCormick & Schmick's. Apparently M&S is the un-yuppy version of McCormick and Schmick's (because when you're poor, you can't afford to buy as many letters, especially vowels).

I worked the entire day on Saturday, front-loading my billable hours like a high-tech washing machine so I can possibly start my vacation a day early at the end of this week. Around 7, Rebecca and I went to Shakir's to catch the tail end of an Indian food night, and then walked a mile in our own shoes to Jay's Saloon in Clarendon for beer and pool in un-Clarendon-like settings. Pool was fun, except that we kept getting our balls stuck in the table. That's the worst. 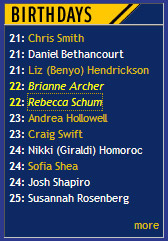 On Sunday, we celebrated Rebecca's pre-birthday with made-from-Betty-Crocker-scratch brownies and gifts, and then a bike ride with her parents through the wilds of Falls Church to one of several Starbuck's on Little River Turnpike. We also had cake and looked at pictures from their California vacation, and then sat on the porch enjoying the 5% of the week when it wasn't raining.

This morning, I got up to discover my windshield completely coated in bird droppings (it was like the anti-Rainex), although the rest of the car was completely clean. I then arrived at work around 6:50 and wrote this last paragraph, after being attacked by the eight thousand upcoming birthdays in the sidebar (and if I ever get a motorcycle, the sidecar will have a sidebar so the passenger can better enjoy the ride with mixed drinks). Happy Birthday to Rebecca and Brianne!

Woman wakes up with 56 tattooed stars