The weekend as a whole was characterized by sunny skies, interspersed with just enough cloudburst rain to prevent me from mowing the lawn. 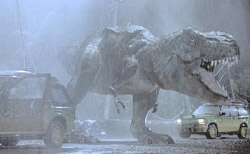 I stayed in on Friday night, did some work around the house and also did some design work on the favours to be distributed at the wedding (commemorative NASCAR underwear). I also reread the book, Jurassic Park, which I noticed on my shelf and hadn't read in over a decade. It wasn't as good as remembered, mostly because of the annoying eight-year-old girl character, who made me want to toss the book across the room on more than one occasion.

On Saturday morning, I did two full hours of shopping, ordering brand new pairs of glasses that look exactly like my old pair, a new litter box to replace the five-year-old box that smelled like the inner flank of a horse, and the Jurassic Park adventure pack, containing all three movies for the price of one. I didn't even know that this was a trilogy, but apparently the third movie was tragically horrible. 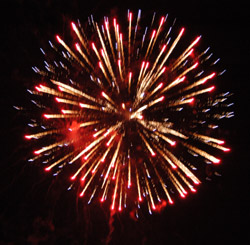 After dinner with Rebecca at Cantina d'Italia in Herndon, we wandered down the street towards the Herndon Festival where we watched the gently unraveling coloured lights of the fireworks arc across the firmament over an ancient Sunoco station, and played Spot the White Person. I had it easy, since the white person was constantly by my side in a sea of Latinos. The festival was ridiculously crowded, and the deeper you got into the middle of the grounds, the less you could actually move.

On Sunday, I tried to mow the lawn again, but failed, and then went to a birthday party in Front Royal where I mingled with many of Rebecca's relatives. We came home around 7 and baked a homemade pizza with pepperoni, saut?ed mushrooms, tomatoes, bacon bits, and black olives for dinner, and then finished the second season of Alias.

Man convicted after bragging on Myspace