The final Fragments column of 2007

♠ I received an email invitation to my company's holiday party last week. You can ignore the now-typical January date (because scheduling things in December is so stressful for everyone, so it's better to place the party alongside the delivery of the first post-Christmas credit card bill). What you can't ignore is the location: the office. While I do like our office, it's definitely not the proper setting for anything labelled as a party. Were both the Hyatt and the Elks Lodge Community Center booked up already?

♠ I would be more mocking of this if I actually attended office parties, but that fact that I don't takes away some of my mocking privileges. Generally, I just stay home where I can be "firing ice" in private and waiting for Anna to drink too much at her office parties and have to crash at my house.

♠ However, I fully expect to get the money they saved on renting a party location as a Christmas bonus. If not, I may choose to continue mocking the party venue from this website behind my alter-ego, "BU".

♠ I saw a fun typo online the other day that I have claimed for my own. Some clueless individual used the nonsense word "anonymosity" when they really meant "anonymity". This new word is the perfect term to describe the viscious sniping and ranting vitriol that you encounter online from nameless, faceless Internet people who wouldn't be nearly as scathing in a face-to-face conversation. 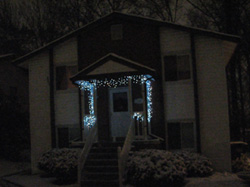 ♠ Here's a lovely picture of my icicle-like Christmas lights, a subdued non-denominational expression of holiday cheer guaranteed to appeal to everyone. Even though Anna hates them, they're far better than one of those ludicrous globes. I'm not sure where Santa and Baby Jesus want to be this holiday season, but I'm pretty sure it's not inside a drive-by peep show that gradually deflates a little bit every hour.

♠ There's a house on Church Road with one of those ridiculous inflatable snow globes surrounded by all manner of glow-in-the-dark festive-yuppy paraphernalia. The effect of this Fairfaxian Winter Wonderland is marred by the 1970s era car sitting in the back yard. It's not even up on blocks -- it's just parked on the patio next to the screen porch.

♠ Apparently, these people never learned the basics of topography. Lesson number one: If you try to hide an abandoned vehicle in your back yard, and you live on the corner of two streets, you've pretty much put it in your front yard. All you need is a lawn chair and a six pack of beer and you could be from West Virginia.

♠ I picked up a twenty-four pack sampler of Sam Adams Winter Ales at Costco on Wednesday, because a Sam Adams lager is almost as good as half of a Guinness. That was my thinking, at least, before I tried the hideous Cranberry Lambic which tasted like someone tried to make a dessert wine out of hops and Jolly Ranchers. Whoever thought cranberries and beer would make a good fit should be shot. Cranberry lambic is the worst of all.

♠ (The last sentence in the above fragment was written in lambic pentameter).

♠ I had to look up iambic pentameter for today's post because I couldn't recall exactly how it went. I remember very little from any given English class.

♠ I'm not sure I can trust my Learn Spanish Now CDs anymore, because the previous lesson introduced conjugations with this description: Consider the English verb "to be". There is a different form of this verb for each pronoun: I am, you are, he is, she is, we are, y'all are, and they are. I did not realize that y'all had been promoted to an official pronoun. If that's the case, then Pluto should be a planet, even if it is just a tiny ball of rock and ice.

♠ Speaking of ice, the plan for Saturday calls for ice-skating at the Sculpture Garden in the evening. I've never been ice-skating before, but it's essentially attacking some ice with paired metal blades, and I'm expecting to be a pretty decent ice ninja. Sunday is "put up the tree and make cookies" day at my parents' house. Next week at work should be pretty relaxing, because it's the first week in which everyone who works for the government or pretends to be a business developer takes off for a month-long vacation. The offices will be pretty quiet, no doubt.

♠ Happy Birthday Kytty! Have a great weekend everyone!

Kangaroos are not known for their love of the sea

Why pregnant women don't tip over