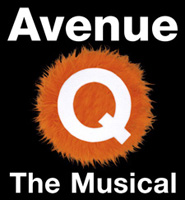 What do you do with a B.A. in English,
What is my life going to be?
Four years of college and plenty of knowledge,
Have earned me this useless degree.
I can't pay the bills yet,
'Cause I have no skills yet,
The world is a big scary place.

After the "Avenue Q theme and opening sequence" play on two massive television screens that drop down from the ceiling, this is the first song of the evening, sung by the fresh-faced puppet, Princeton, who has just graduated from college and realized that he has no idea what he wants to do with his life. He moves onto Avenue Q (because the rent on Avenue A through P is too expensive), and meets a Sesame-Street-like collection of neighbours, both puppets and humans (the superintendent of the building is Gary Coleman, bemoaning the fact that he was a has-been at the age of 15 after Different Strokes). 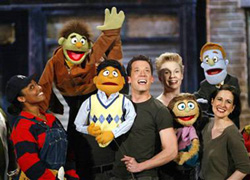 From beginning to end, the musical is non-stop belly laughter, touching on all manner of hot topics with a surprisingly high level of intelligence. Anyone who has fond memories of Sesame Street from their youth will be feel right at home as the cast addresses tough issues like racism ("Everyone's a rittle bit lacist"), homosexuality ("If you were gay, that'd be okay"), and even simulated puppet sex. Here's a clip of "It sucks to be me"

from the London show.

Performances were universally excellent, which is surprising since every musical has that one actor or actress that can't sing a note, or the one singer that can barely act. Everyone, even the understudy, managed to do an amazing job while controlling a puppet on one arm (and sometimes singing the parts of two different puppets at the same time). Two of my favourite characters from the show were the Bad Idea Bears, a pair of cute Care-Bear-esque fuzzballs who randomly showed up to dole out bad advice, like telling Princeton that he should spend all his money on beer, preferably a keg, instead of saving it up.

The show wasn't just fornicating puppets though -- the two televisions would often drop down from the ceiling with a short video to further teach one of life's lessons. One such video shorts five nightstands stacked in a pyramid. One by one, a nightstand is removed while the voices of children count backwards from five. When only one is left, the children shout ONE NIGHT STAND and the words flash on the screen. 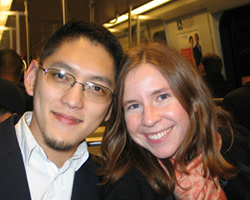 On the technical side, the show was a little bit and heavy on the treble timbres. The accompaniment (mostly electronic keyboard with spare orchestration around it) sometimes swallowed the lyrics. The show could have been helped by turning the master volume down one click and turning the singers' mics up half a click. All the important lyrics get through though, and the music sounds like it could have come straight out of Sesame Street.

All in all, it was an excellent show and capped a perfect evening with Rebecca, Anna, Jack, and Kristy, despite the cold rainstorms blowing through the city.

Sex in Space: The Final Frontier

People who can't get to space store their seed in Norway