helping you to feel like an alligator in a handbag factory

♠ Don't forget that tonight at 7 PM is the deadline for voting in the Museday poll on the left sidebar! You can listen to all the samples in Tuesday's post.

♠ Many people have sent me cards and letters wondering why my crotch seems to be emanating heavenly light in the photo from Tuesday's post. As a matter of fact, that light is actually coming from my pants, and not the lamp I keep under the desk for when I tinker inside my computer. It makes life pretty difficult when trying to fall asleep, but it's great for reading in bed. Life is trying with a heavenly body like mine. 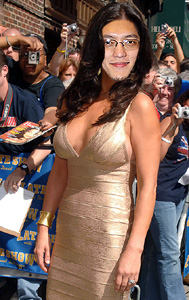 ♠ Other non-believers wrote in to say that they saw no similarities between me and Welsh actress, Catherine Zeta-Jones, in Monday's post. This is pretty hard to fathom since I was her body double in several movies and autograph events. You know that boring, plotless movie, Entrapment, with Sean Connery that was only made so Catherine Zeta-Jones could shimmy under a laser beam with her ass in the air? They paid me double for that scene. I'm probably just taking pictures from bad angles -- otherwise, you'd see the resemblance almost immediately. 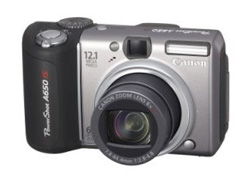 ♠ Speaking of cameras, I just purchased a Canon A650

and it should be arriving by UPS sometime today. The hand-me-down Canon S3 I got from my dad takes great pictures, but it's so cumbersome and heavy that I never want to take it anywhere. I don't really have much use for the 12 Megapixels that the camera boasts, but the older model cameras in the same family line were actually more expensive than an A650. I guess this is how Canon phases out the old technology.

♠ Speaking of old technology, the XM Radio I purchased last year isn't nearly as well-engineered as the one I bought in 2004. The contacts are smaller and more prone to snapping, while the power jacks tend to wiggle out during normal car ride vibrations.

♠ I might not renew my XM subscription next year anyhow -- it's starting to sound more and more like normal radio every day (loops of the same three or four payola'd radio hits and the increasing presence of ads, combined with the fact that they take my one station, UPOP off the air for a month every Christmas). Even the introduction of Channel 59 LED (All Led Zeppelin All the Time) hasn't helped. All that station has taught me is that Led Zeppelin achieves a droning timbral homogeneousness that's like listening to paint dry if you try to listen to three or more songs in a row.

♠ The above fragment is probably inflammatory enough to get me removed from Mike's (of Mike and Chompy) blog links. That's okay though, because I'll retaliate by removing him -- there's already one too many blogs in the Friendly column on the sidebar. It's just not well-balanced.

♠ Speaking of blogs, Kathy (of Kathy and Chris) has been writing in her new blog for over a month now. She's linked on the sidebar, so why haven't you visited it yet? Chris could not be reached for a statement, but he probably would have said "What could be more exciting than reading about a Music Theory Conference? Leave some comments, bitches".

. I never thought I would say the words "Finger Eleven" and "good" in the same sentence without also using the word "riddance", mainly because their original one-hit-wonder song was One Thing

, a horribly-sung, mind-numbingly boring song that used up all its good will in the first thirty seconds, and overused the tonic like a bartender in a trashy dive trying to conserve the gin.

♠ While trolling YouTube for those videos, I also found this one for Jack Penate's Second Minute Or Hour

, a fun little ditty that sounds like a less annoying version of The Hives. I really hope he was able to record this music video in a single take.

♠ This weekend we're hitting up the National Building Museum in D.C. on Saturday, and then going to a Potluck Holiday Dinner on Sunday. The remaining time will be spent doing my annual clean-out of the filing cabinet, wrapping Christmas presents, playing with my new camera, watching the second season of MI-5, and getting all the extra stars that appear after you beat Super Mario Galaxy (review on the 20th!).

♠ Happy Birthday Matt Koerner on Sunday! Have a great weekend!

Help yourself to a little placenta pizza