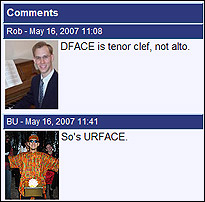 It's a widely accepted fact that I am the leading American storehouse of musical knowledge, so it's no surprise that A&E referred to the Museday Tuesday phenomenon as "a rare glimpse at the inexorable and inevitable direction of modern music". Since I started this little featurette seven months ago, I've written sixteen short excerpts of varying musicality.

Now that 2007 is coming to a close, it's time for you to pick your favourite snippet (out of a subset of MY picks, because after all, I invented the treble clef). I've posted the recordings of each snippet, along with a synopsis that is exactly seven words long below. Any of the compositions with the double-thumbs-up icon is eligible for your vote. I will end the year by taking one of these sixteen works and expanding it into a longer work with a beginning, middle, and end (probably about two minutes in length).

Cast your vote before this Friday night using the Poll in the left sidebar! The extended composition will be aired exclusively at the URI! Zone on Tuesday the 18th. 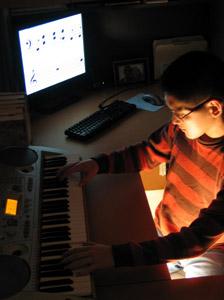 Moodily: Nobody loves me and my dog died.

Obnoxiously: Weird Al Yankovic is "Ready For This".

Leggier: Go to a saloon for easy women.

Carsick: Dad's BAC was only point one seven.

Dinkiest: Steve Reich stole this sound from me.

Reclusive: Harry Potter and the Onset of Puberty

Trifid: Very little to do with the title.

Frowzy: On this gameshow you lose a kidney.

Trampled: Nothing is cooler than a baritone sax.

Surefooted: An ass rental in the Grand Canyon.

Chichi: You could win on Wheel of Fortune.

Also realize that my picks are based on how much more can be said with the initial idea -- for example, I really like Moodily, but don't think I'd have much to add to it if I wanted to extend it. Don't agree with my picks? Sound off in the comments section!

She felt threatened by the man on behalf of herself, her family and her cat.