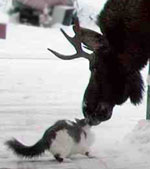 The new windows will be installed in four to six weeks. In the meantime, I'll be transporting all of my books and papers and non-daily gadgets to the house. It looks like I'll be moving around the end of March or so.

A year ago today, I posted the top fifteen funniest comments on RateMyProfessor.com

. It looks like the site's longetivity has been established -- I never expected that I'd have steadily produced news posts since 2001. Mike's blog is up to three months now -- that's like twelve of his normal length projects.

How to Name a Street

A Fulton County jury delivered its blow to the little kicker this week.