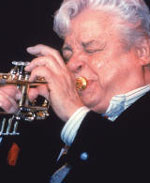 Tomorrow, I have a company coming out to give an estimate on windows for the new house. I'm going to have to shift my buying paradigm to go from $20 for a movie at Best Buy to $400 for a framed piece of glass that looks like it's not there when it's clean.

Jim Barry says I should start a residency in my basement for starving composers.

I was listening to Maynard Ferguson's Chameleon album last night. The music would sound incredibly good if they would just remove one musician from the band -- Maynard, himself. He brings his band down.

How not to keep your new license

David Walker kept winning a contest to predict which side condom wrappers would land on, when his friend allegedly pulled out a gun, saying he had had enough.