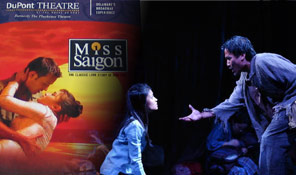 We left Northern Virginia yesterday around 9:30 to go see Miss Saigon. After driving around the uselessly twisty portion of 495 above DC, and paying some of our booty on tolls through Maryland, we arrived in Wilmington, Delaware, a small pocket of urban blight that looks just like a real city, but only four blocks across. After six miles of suburb driving in search of a national chain for lunch, we finally stopped at Arby's (being the only choice besides Dunkin' Donuts and one McDonald's).

The show took place at the DuPont Hotel/Theatre at 2 PM, and was filled with the usual mix of high-class old folks and sleek yuppies. The production itself was quite good, especially considering its roots as a gargantuan epic. The orchestrations managed to survive with eleven musicians rather than forty-some, though the lead trumpeter occasionally sounded like he was doing Stamp warmups instead of playing musically.

The cast was hit or miss, although Jennifer Hubilla as Kim, and Jon Jon Briones as the Engineer were perfect. Alan Gillespie as Chris was the least-whiny Chris I've heard to date, though he took a page out of Ewan "Belty" MacGregor's book whenever he had a solo. Mics were not necessary for him. John was good enough, though he could have wailed a little more in the gospel-y solos, and Thuy was Mexican, so I couldn't understand most of his dialogue (and when I could, it didn't have much emotion).

The only true sore spot of the production was the actress playing Ellen, a dowdy "clenches fists and closes eyes for high notes" performer who sparked zero sympathy as Chris' wife. She should be noted for almost single-handedly destroying the emotional buildup of the story in her final solo, but luckily she only had two real songs, and the Engineer did such a great job in the following number that she was quickly forgotten. You'd think there'd be better performers out there capable of the role (especially since Kim and the Engineer were so good), or at least the actress would improve after a year on the road with the show...

FSU has 'tight' dinners for recruits

But not as 'tight' as Colorado