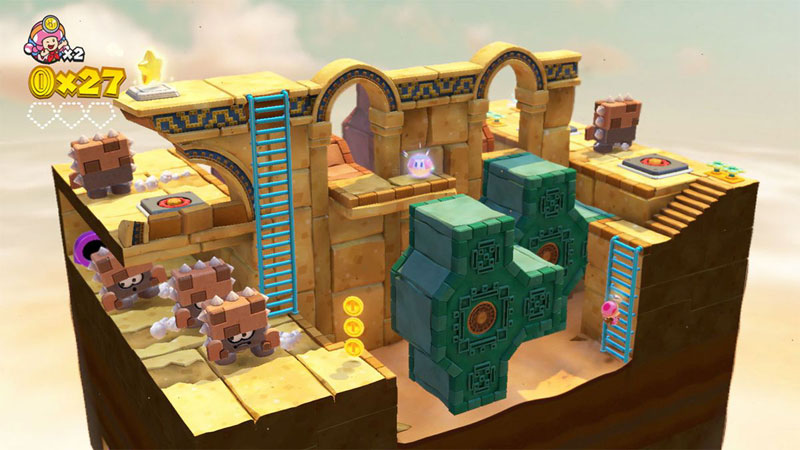 Captain Toad: Treasure Tracker was originally released for Nintendo's failed Wii U console. I'm torn on all the effort going into these ports -- while it's nice to play some fun games that never gained widespread appeal beyond the 4 people that actually bought the old console, I'd much rather have more original content designed specifically for the newer console.

Captain Toad is a charming puzzle game where you maneuver a pacifist Toad (who can't jump because of his heavy backpack) through 64 self-contained 3D puzzle boxes to collect gems and stars. Porting of the controls from the Wii U (which had a touchscreen in your lap to go with the big action on the TV screen) is pretty awkward in some places, and the portable version of the Switch controls are definitely more comfortable than the big-screen controls. Even then, there are many cases where you have to control 3 things simultaneously (Toad movement, camera movement, and touching parts of the screen) within the human limitation of having only 2 hands. It is also hard to touch the middle of the screen in portable mode unless your fingers can already span one and a half octaves.

Each puzzle world takes just a few minutes to complete and features binary puzzle switches, enemies to avoid, and secrets found by rotating the 3D camera. There's really not much challenge until the last 10 levels of the game -- most of the time you eventually win just by playing long enough and trying different permutations of switches and buttons. There are also a few arcade sequences that feel completely out of place for a leisurely puzzle game, simply because Nintendo has a passion for making levels where your character is out of control near pools of lava.

There's less than 10 hours of gameplay here if you ignore the awful "go back into each level and touch the hidden Toad graffiti" option that prolongs without any worthwhile reward. However, the worlds are cute and well-designed (especially the bonus levels featuring worlds from Super Mario Odyssey, designed specifically for this port). I think a pre-teen gamer would have the most fun with this one, especially if you can find it on sale.

Final Grade: B-, pleasant while it lasts but marred by awkward controls and minimal challenge