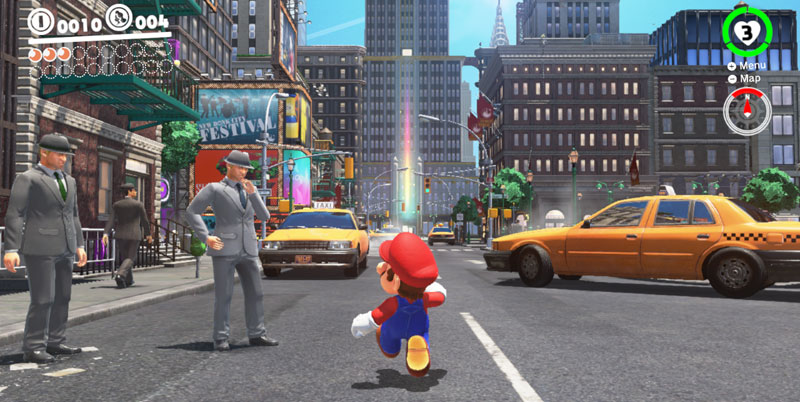 I first gave this game a C- after playing for several hours and not finding much to draw me back to it. After 6 months without turning on the Switch, I recently dusted it off and gave it another shot. One key difference between my original abandoned attempt and now is that I can play for longer periods (sometimes an hour at a time) and on a big TV screen rather than the portable screen. Back at Christmas time, I was squeezing in games while Maia barely napped for 10 - 20 minutes at a time (just narrowly long enough to get through the interminable load screens and reminders to use motion controls) while walking around quiet corners of the house.

I appreciate this game much more on the big screen, but it's still hindered by flaws that grow more apparent as the series progresses:


Super Mario Odyssey misses the mark on the right level of frustration to build into a game. Maybe in middle school when there was nothing else to do, I would have loved the challenge of dying 20 times on a single moon (mostly from "helpful" camera movement, random control issues, lava, or horribly controlled vehicles) but I just don't have time for that anymore. Nowadays, I want to win a game because I'm good at it, not die a lot because of random elements outside my control.

On the positive side, there is a solid amount of varied game content (filler moons notwithstanding), you can finally skip cutscenes, and the soundtrack is great (similar to Galaxy's, the one I own the CD for). In spite of its flaws, I did play this game for about 50 hours and got to about 809 moons before moving on, so it definitely does something right. I guess that just makes me more disappointed that it could have been so much better with a few different design choices.

Final Grade: B-, engaging and by no means a BAD game, but too much frustration and tedium involved

The 57 moons I skipped (because foot-racing takes too long to retry over and over, and no one wants to fight through the horrible boss fights again)