Memory Day: Wii U (and sometimes, Why?) 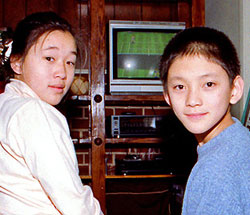 Growing up, our household was always a Nintendo household. We had a NES (two years after everyone else in the neighborhood did), followed by a Super NES, and I can still remember the innocent years when I thought a game was good because "Nintendo Power gave it a 5 out of 5!!".

My sister and I had matching Game Boys, which we used to play games that no one had ever heard of (like Dedalus Opus) until the "monochrome bars of death" covered up too much of the screen to be playable. We never owned any of the systems from Sega, Sony or Microsoft, and that embargo continues today for no particular good reason.

The Nintendo love decreased in college and beyond: I bought an N64 when I lived with Rosie and Anna, followed by a GameCube at Florida State (where every day was 2 hours of composing followed by 22 hours of nothing to do) but they were bargain bin purchases long after the hype had faded. I never had a GBA, but I did get a DS Lite and enjoyed it greatly, apart from that retarded Dogs game full of starving puppies. WAY TO MAKE ME FEEL GUILTY FOR NOT PLAYING, NINTENDO. Plus, "blowing on the mic" will always be creepy. I never bought a 3DS because I don't need to pay someone to give myself a migraine.

I had never really planned on buying a Wii, but ended up snatching one up in a pre-Christmas fire sale in December 2006. In the pre-Rebecca years, I was working about 80 hours a week, and spent way too much on a bundle consisting of a Wii, 2 fun games, and 4 games that no one should ever have to play, in order to justify the money I was earning in overtime.

I mostly enjoyed the Wii in spite of its ridiculously long loading screens, but for every great game like Rayman Origins or Wario Ware, there were other games that forced you to use the motion controls for gimmick's sake when it clearly detracted from the game. You need to sneeze? Well Mario's going to spin jump off a cliff then! 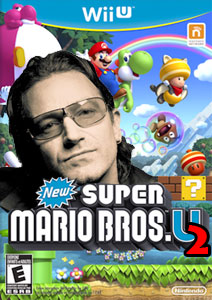 This brings us to the release of the latest console, the awfully named "Wii U", which came out last Sunday. I get that the similar name is intended to grab all of the casual gamers who bought a Wii, but now we get to see an endless string of "titles ending in U" as a form a branding just slightly worse than the kind used on a cattle ranch. Hopefully, games on the Wii U will not get any sequels, because then it will always look like Bono is somehow involved.

Being a former Nintendo fan, I looked desperately for a good reason to throw some money at this console, but I'm just not very clear on the point. I must not be the only one, because a trip through Target yesterday showed 3 consoles sitting forlornly under glass like Nintendogs at a shelter fair.

On paper, the Wii U just takes all of the worst parts of the Wii and puts Carmex on them to make them "shinier and more noticeable". Besides HD, the big gimmick is an iPad-like controller for player one, so they can see something different than everyone else. Sure, being "IT" while everyone chases you in a game of tag sounds kind of fun, and it probably will be in a novelty party setting, but is that really worth $350 for a console plus $60 for each game? The only possible outcome is a series of awful games that maximize the novelty of using a different kind of controller while minimizing the fun factor.

I may yet buy a Wii U, because I am a yuppy living in Northern Virginia and am incapable of passing up a deal, but I will probably be dragged into it kicking and screaming (because the new controller will require you to kick and scream). The simple truth of the matter is that console gaming will never be as cost-effective as PC gaming, but as a gamer, I can be illogically tempted to play the latest Mario game.

Not Zelda though. I am through with Zelda.