I still regularly play Hearthstone as a casual "game I can play on the side while doing more productive things since people take forever to play their turns". Here are some stats from about 1000 games played as either Paladin or Priest.

I like to play mid-range control decks, so generally if I survive past turn 6, I have a pretty good chance of winning, unless I'm facing a Grim Patron Warrior and Giant Warlock deck. I lose slightly more than I win, but have fun playing non cookie-cutter decks. I'm generally around Rank 17 but have occasionally gone as high as Rank 13. Here's the raw data I've captured, sorted by win rate. 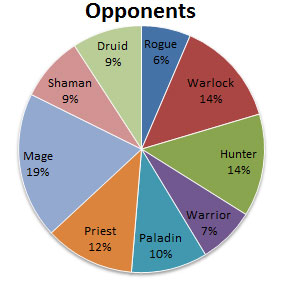 Are you still playing Hearthstone?