Twenty years ago today, on August 26, 1995, I was fifteen years old and about to start my senior year of high school. According to my historically preserved Far Side calendar, the 26th was a Saturday just after the end of Band Camp, and my sister had just left for her sophomore year at UVA. 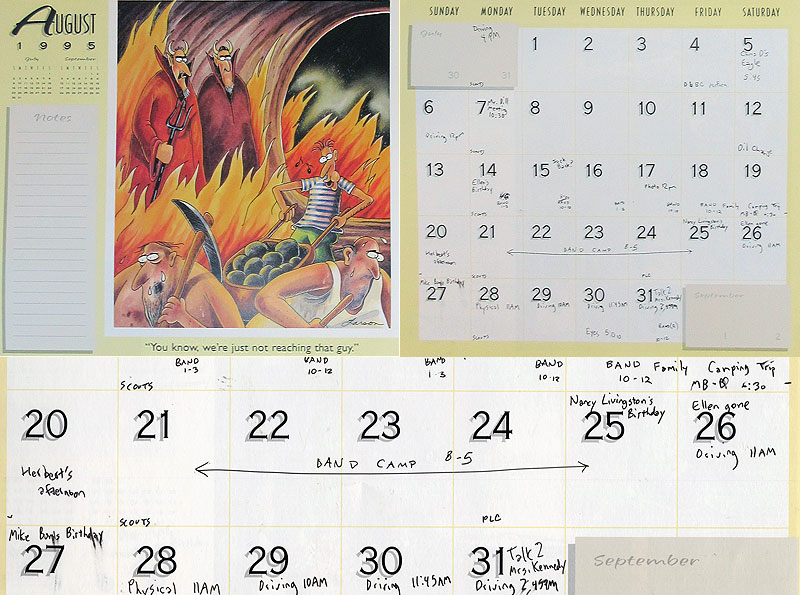 Having finally reached the Age of the Learner's Permit (15.5 years in Virginia), I spent much of August doing behind-the-wheel training through Keith's Driving School. On this particular Saturday, my instructor, Big Mike, was particularly disagreeable since he'd just had surgery the week before. I did my hour behind the wheel in Hybla Valley with a girl named Lucy in the back seat while Big Mike played his country guitar demo tapes, and then we swapped for the next hour. We ended, as always, at a 7-11 so Big Mike could grab a bite. His self-applied nickname was actually Big Mike -- I'm not just calling him that because he was bulky.

In the afternoon, I crushed soda cans for recycling in our newly purchased Crusher (thanks, 1990s), and then went for a bike ride around Alexandria. Finally, I went up the street to our neighbours, the Jarrett's. Walt Jarrett worked for one of the big publishers back then (maybe Houghton Mifflin?) and hired me to read off several pages of price lists so he could punch them into the mechanical calculator more quickly. I earned twenty bucks for about an hour of mindless work, which went towards the purchase of Phantasmagoria (the full-motion-video horror game by the creator of King's Quest) the next morning.