Montreux was a bigger town than expected, with narrow European streets and a bustling, walkable feel. Still, it struck a fair balance between the over-urbanization of Munich and the pastoral setting in Grindelwald. You could walk lightly trafficked streets to get that quaint, European town feel, but the tail end of the Alps still loomed overhead, just a ways down the coast.

We debarked from the train and walked to the Hotel Tralala, a chic music-themed hotel where John Kerry once stayed in May 2015 (according to the framed letter at the front desk). Each room had a famous musician featured heavily, and our bed was watched over at all times by Sting. On the first evening, we walked down to the waterfront to get a feel for the town, passing by Montreux's most famous tourist attraction: an underwhelming statue of Freddy Mercury from Queen. We ate dinner at an expensive place with a nice view overlooking Lake Geneva, where Rebecca relearned rule of life #23: Never order the risotto because afterwards, you'll just feel unsatisfied like you ate a side of tasteless butter.

As a light rain washed across the town, we scurried back towards the hotel (all uphill of course), and ducked into a tiny local restaurant for wine and dessert. Now that we were back in the French-speaking area of Switzerland, my high school French came in handy again, and in this restaurant, I was even able to help the owner serve a group of Asian tourists who spoke zero French and a small bit of English (they were having trouble ordering "warm" water -- pas trop chaud et pas trop froid). 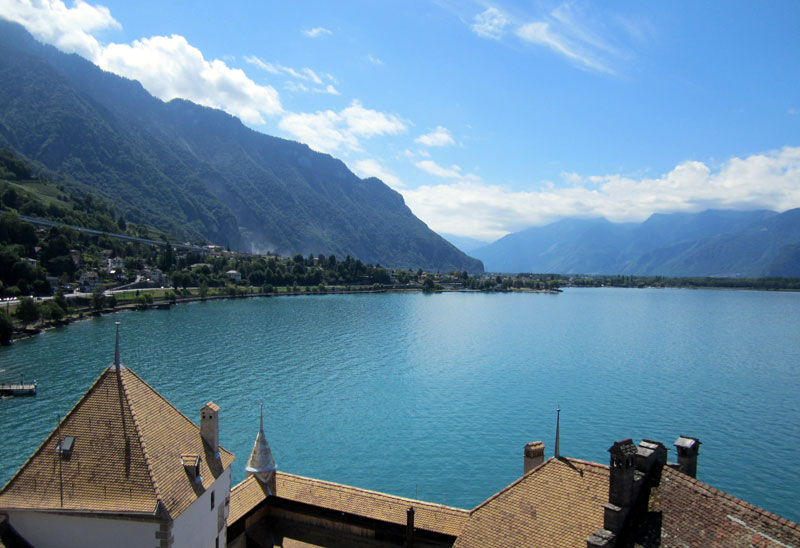 On our first full day, we visited the resident castle, Chateau du Chillon. It was pleasant enough, but nowhere near as impressive as Carcassonne in 2008. It didn't help that the castle was in various stages of revitalization, and whether an area was kept as it originally had been, restored to how it had looked, or restored to how the archaeologist thought it should have looked, was a decision that varied from section to section, resulting in a clash of styles similar to my artwork when I try to draw plants as a colourblind person.

On the way back up to the hotel, we stopped at a place that the guidebooks identified as a wine tasting bar, Cave Vevey-Montreux. It turned out to be a wine distributor, but the owner was very friendly and did an impromptu tasting just for us. After buying a bottle to drink on our afternoon hike, she even gave us a free corkscrew so we'd remember the place.

In the afternoon, we hiked in the Gorges du Charderon, a canyon of extreme height variations tucked just behind the city. When we reached the highest point, we had our bottle of wine and watched out for roaming goats, and then descended by way of over 1800 stairs (we probably should have gone back through the forests instead). After a traditional meal at a local restaurant (fried stuff with egg on top), we chased the sunset to a nearby church with slightly creepy organ music playing inside. 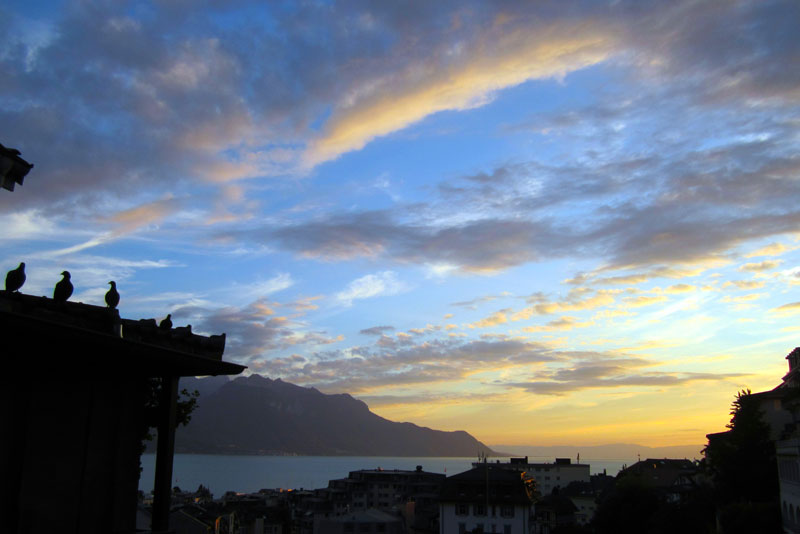 Our final stop on the trip was Geneva. Rick Steves hates Geneva so much that his guidebook is essentially a paragraph telling everyone not to go there. Because of this, we only allocated a single afternoon, but it was pleasant enough and not horrible in the least. We arrived the day before Swiss Day (August 1), so the entire city was gearing up for some major entertainment that we ended up missing. 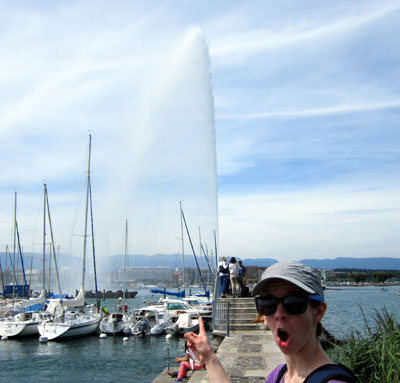 An oft-cited tourist attraction in Geneva is the Jet de l'Eau -- a fountain of water that shoots out of the bay to relieve excess pressure in the water system. This is about as exciting as it sounds, and we docked additional points from it because we waited there for 20 minutes with nothing to show for it (apparently it isn't running for 20 minutes out of every hour). Only when we were leaving did it deign to begin.

We also visited Eglise Catholique, a nondenominational church used only for political ceremonies and selling postcards, but the best part of the afternoon was spent simply eating gelato and people-watching on the Place du Bourg de-Four. And really, that was the general pattern of our afternoon -- wandering to various parks and plazas, eating gelato, and moving on, not unlike a savannah elephant. In the evening, we stayed at Hotel Central, a family-run hotel / B&B with tiny rooms whose entrances went through the bathroom -- we made sure not to go #2 until we were on our way out.

The trip back on Saturday was uneventful, except for the fact that airport security picked me for random questioning twice, and picked Rebecca zero times. We blew all of our remaining francs on airport chocolate (which we have been steadily eating every night since), and then spent a long 9 hours on a delayed United flight whose video screen system crashed almost immediately after departure and could not be rebooted. (First class, in their reclining cocoon seats, were unaffected).

Now we are home again, and I still have over 200 hours of leave to burn through by the end of the year. Where should I go next?