Our flight from Geneva to Munich was slightly delayed, but we got on the subway and made it into the city without issue, bemused by the utter lack of ticket checkers on the train. We opted for Litty's Hotel, a smaller, less expensive hotel a few blocks out of the town center nestled amongst halal restaurants and strip clubs. Normally, its lack of air conditioning would have been quaint, but we happened to visit during a heat wave, meaning that we had to choose between quiet suffocation or the echoing car horns and misanthropes on the corner that continuously amplified up to our 4th floor room in a postive feedback loop like a neo-conservative's Facebook feed. On a positive note, the standard European breakfast of breads, hard-boiled eggs, yogurt, and random bits of lunch meat, cheese, and vegetables was included, and we made sure to fill up every morning.

Upon arrival, we met up with Returned Mike and Annie and had our first beer garden experience. With their liter beers and sausage permutations, beer gardens are a fun and novel experience right up until they aren't -- this takes about two and a half days of non-stop beer garden meals. The premier beer garden, Hofbrauhaus, was far too crowded and touristy to enjoy, but we did use their free toilets several times throughout the trip.

On our first full day in Munich, we signed up for an English tour of Munich through Mike's Bike Tours, run by resident Australians for maximum accent dissonance. Munich is actually a very bike-friendly zone, with cleanly marked bike lanes and kilometers of wooded trails off the main roads, but I still felt more comfortable in the parks than anywhere near cars. As part of the tour, our guide, Julian, had us reenact a famous statue in a quiet courtyard where no one would steal our bikes, before releasing us out into the busy courtyard to see the real thing.

After the tour, we saw a church would have been nice on its own merits, had it not been filled with a new-age art exhibit called "Clouds" consisting of white strings dangling from the ceiling, and then had drinks at a rooftop bar, Eiche, in the bohemian district. We also visited Frauenkirche, a church with steeples like boobs and an interior as boring as coleslaw. Our final sightseeing stop of the day was the Michael Jackson memorial, a statue of a more historical persona which had been taken over by Beat It fans as a shrine to the late pop king (because "Black or White" Lives Matter).

On day two, we took an English tour of the Dachau concentration camp led by yet another Australian, and then sorted out our travel exit plans at the EurAide desk in the train station (which was just as helpful as advertised in Rick Steve's Munich book). After another Biergarten lunch, we visited Asamkirche, which was easily the most interesting church in the set, full of gaudy, ridiculous sculptures and biblical scenes that would have been just as well at home in a Pirates of the Caribbean movie. We only got a glimpse from the foyer this night, because an organ recital was about to start and the ticket seller was incredibly worried about the idea that we would willingly sneak into an organ recital, but we came back the next day for a longer visit. 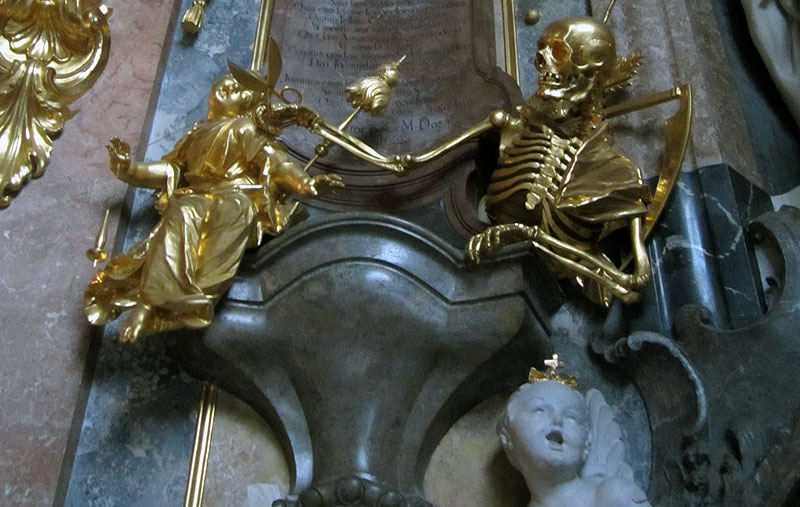 For day three, Mike and Annie split off to go see dumb art while Rebecca and I went to the Munich City Museum for some history and knick-knacks. The Museum was fun, although the English walkthrough guidebook was a little out of sync with what was actually on display. We especially enjoyed the 4th floor Music Museum (having skipped the 3rd floor puppets), full of playable instruments and a lonely security guard who implored us across language barriers to try out all of the exhibits.

We then rented bikes again and spent a leisurely afternoon in the English Garden, baaing at sheep, eating currywurst, and learning Munich traffic patterns. We also went up to the top of St. Peter's which granted a nice view, but was horribly designed for two-way traffic -- it will take you over thirty minutes to get to the top and slowly circle 360 degrees because people are incapable of not treating the parapet like an aisle at Costco. 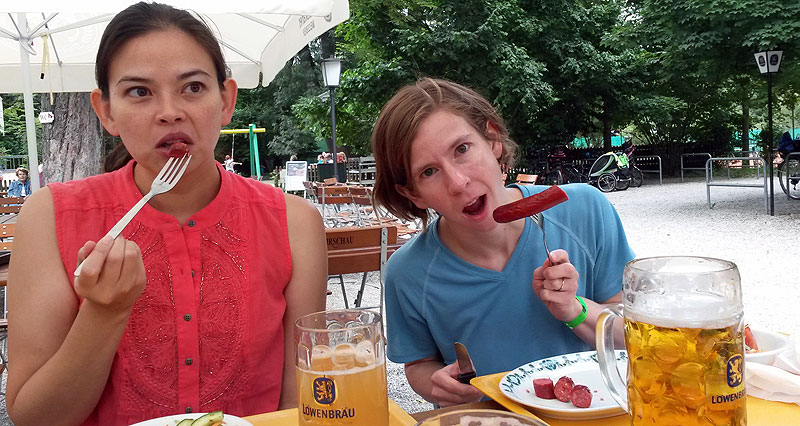 For our final night in Munich, we ate at Opatija's. Not realizing that there were two Opatija's within a four block radius, each couple sat in a different Opatija's wondering where the other couple was until we figured out what was going on.

Overall, Munich was a fun city to visit, although it was definitely made more fun by being there with friends. On its own merits, it doesn't really have much to offer that felt unique or Europe-ancient. I guess the city couldn't help getting bombed to rubble in the war, but I was hoping to see more unique architectures and attractions. Give it two days, skip the top of St. Peter's and ignore the mechanical clock in the Marienplatz, which is about as impressive as watching a 5-disc DVD player swap discs.

To Be Continued Next Tuesday: Asian Tourists and Impossibly Vertical Mountains in Grindelwald