EUsday Tuesday, Part I of IV

Tuesdays in August will be dedicated to our recent European Vacation which, unfortunately, was not won in a game of Pig in a Poke. For our first international trip since 2012, we designed a trip around Rebecca's idea to go trekking in the Alps, and added some logical cities to the mix that also allowed us to meet up with friends along the way.

Rebecca started off by flying to Geneva, Switzerland on 7/11 and then taking a shuttle to Chamonix, France. She then spent the next week and a half hiking a circuitous route around Mont Blanc (translation: Cracker Mountain) that took her through France, Switzerland, and Italy. You can read more about this leg on her blog. 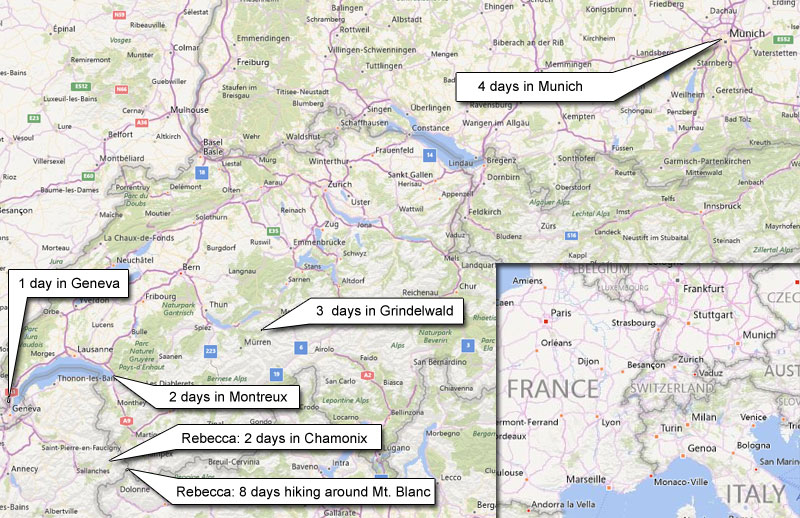 Having no wish to hike over 12 miles daily for consecutive days, I stayed home and watched science fiction and heist movies with Booty. The part of the story I'm in began on 7/21, when I took an overnight flight to Geneva myself. I met Rebecca at the airport, ditched her smelly hiking gear in a long-term locker, and then we flew on to Munich, where we spent four days with Returned Mike and Annie. We then parted ways and took a train to the heart of Switzerland (near the canton of Uri) for three days in Grindelwald, Switzerland.

Once we had overdosed on both the German language and impossibly high mountains, we took the train to Montreux, Switzerland for two days in the French-speaking area around Lake Geneva. Finally, we spent a single afternoon in Geneva before flying back to Dulles and arriving home on 8/1. 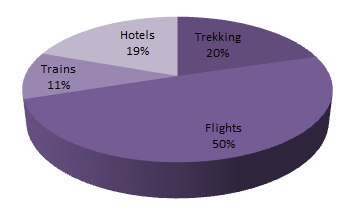 Not including incidental daily expenses (which were average in Germany and pricey in Switzerland), we paid under $8000 for the two of us, with costs broken down as seen in the graphically intensive pie chart to the right. The flights were easily the most expensive portion, so if you want to repeat our steps with a tighter budget, you should consider an undocumented shipping container on a cargo ship.

Trains were the most pleasant aspect of our travel days, especially with the Swiss Travel Pass that was our Ticket to Ride for 4 flex days of travel within a single month and the constant multilingual signs and announcements throughout the well-established European train infrastructure. It would be great to have such an infrastructure here in the US, but we're probably too big and fractious of a country to ever get anywhere near it.

For this trip, we shared a single camera, and you can see the photos I selected (239 of 500 raw files) in my Europe, 2015 album. Rebecca will probably have a much different set when she goes through them, so you can pretend that we're both unreliable narrators and draw your own conclusions about the success of our trip!

To Be Continued Next Tuesday: Bikes, Brats, and Beers in Munich