Owing to the great helpfulness of the German EurAide staff, we made the eight hour train ride from Munich to Grindelwald (via Austria and harried train transfers in Zurich, Bern, and Interlaken) without incident. We arrived in the town of Grindelwald around 3 PM.

Grindelwald is a highly polished tourist destination, with infinitely easy logistics and everything you need at hand. In fact, it probably would have too touristy had the entirety of the town not been dwarfed by the natural spectacle of the Alps towering overhead a few miles in any direction. Living on the East Coast, vertical scale is not a day-to-day occurrence, and having mountains two and three miles tall obscuring the horizon will play with your mind's sense of perspective in fun ways. When we got home, the sense of flatness was overwhelming.

Our weak German was not an issue here as the town shoppes were English-friendly. Unexpectedly, Asian tourists outnumbered Anglo tourists by a ratio of 3 to 1, crowding the trains and streets and living up to all of the classic photography sterotypes. For many, it was more important to take pictures of any and everything than it was to actually be present in the experience.

We checked into the Hotel Tschuggen, a smaller hotel in the town center that adhered to the standard "pieces of fruit, meat, eggs, and cheese" breakfast and then explored the town by walking from end to end. As a light shower began, we ducked into the Di Salvi Ristorante, which was having a special on grilled chicken halves that could be smelled from blocks away. 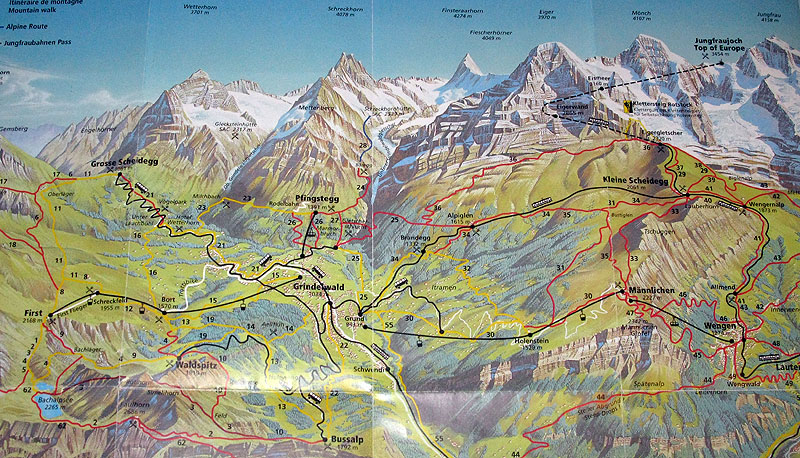 For our first full day, we joined our Asian friends on an expensive, extended train ride from Grindelwald up to Jungfraujoch. With an elevation change of 1.5 miles, the train drove through the Eiger mountain, stopping twice at strategically bored portholes with decent views. At each stop, all of the Asians hurried off the train to snap an obligatory picture and smoke a cigarette. We sat across from a couple from Montana who were taking an extra day in Switzerland after the wedding of one of their former exchange students.

The weather at the "Top of Europe" was perfect for our trip, and although the temperature hovered near freezing, we had clear views in every direction. We spent most of our time in the Sphinx Observatory, coming inside occasionally to warm up. The "Ice Palace" and other tchotchke-oriented sections were rather silly, but we did make sure to get our free chocolate from the Lindt Shop. 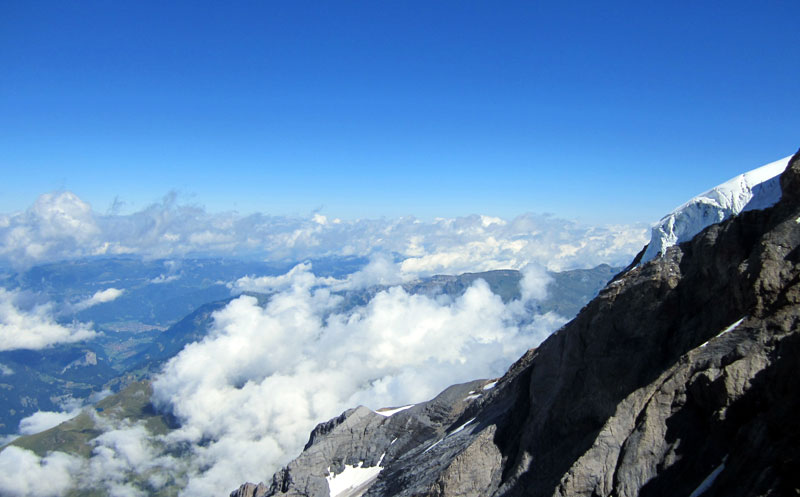 After getting sufficiently chilled, we took the train halfway down the mountain to Kleine Sheidegg and did some more temperate hiking around glaciers, meadows, and cows. We actually got caught in a cow collection activity, during which a farmer on a dirtbike rode through the meadows with his two dogs, rounding up the cows and sending them home for dinner. For our dinner that night, we ate next door to our hotel at Hotel Spinne. The food was not particularly exciting, but the liter beers and 270 degree view of every major mountain more than made up for that.

One nice feature of Grindelwald's extensive cable car infrastructure was that we could skip the boring lowlands portions of any given hike and expend our energy on the exciting high parts. On day two, we took a cable car up 0.7 miles from Grindelwald to First, and then did a strenuous hike up another 0.3 miles over about 8 miles of horizontal trekking to a tiny hamlet called Falhorn (lower left on the map above). The picture below is at the base of the final Falhorn ascent, with whipping winds and clear views in every direction. 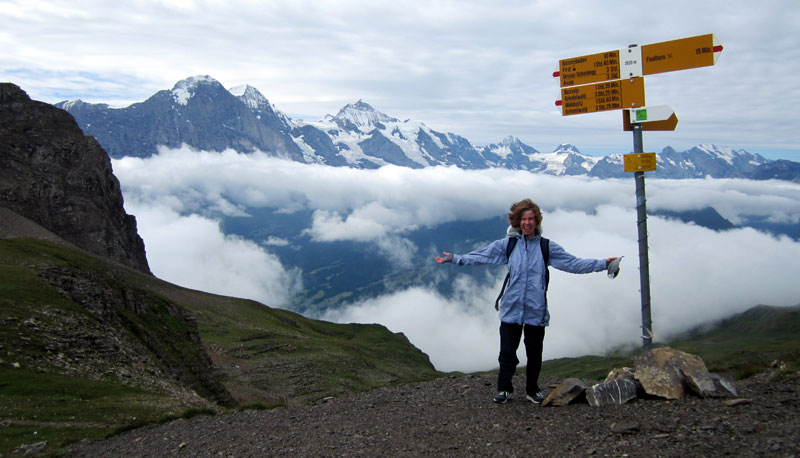 We survived the balance-destroying winds and random cows to reach Falhorn, an inn and restaurant settlement reachable mainly by helicopter. They charged a franc for the toilet, which is their perogative for being 1.6 miles up in the air, and we also shared the best tasting $5 cup of hot chocolate we'd ever had in the warmth of the restaurant.

After hiking back to First and taking a cable car down the mountain, we took a bus to the nearest Glacier and hiked several more miles up to an abandoned restaurant. We failed at finding the glacier, but a very talkative Brit let us know that the glacier had actually melted within the past three years, and was no longer accessible from where we stood. Disappointed, we took the bus back to Grindelwald and had another dinner in our favorite sunset spot at Hotel Spinne.

Our final morning in Grindelwald would consist of one last hike to Pfinestegg, a brief but very steep hike up to a coop full of chickens and guinea hens. We then got back on the train and headed next for Montreux, the French-speaking town on Lake Geneva.

Grindelwald was easily the most impressive leg of our trip, full of nature and hikes while simultaneously offering pampered amenities like easy-to-arrange transportation and delicious premade hike sandwiches at the local COOP grocery store.

To Be Concluded Next Tuesday: A Return to French in Montreux and Geneva