melts in your mouth and most other intrinsically heated environments

♠ While exercising on Wednesday night, I managed to smash my left pinkie between two seven twenty pound dumbbells, so accept my apologies in advance if this post is a little light on Q's, A's, and Z's. Were I still playing World of Warcraft, I would have trouble casting Vampiric Embrace and circle-strafing. 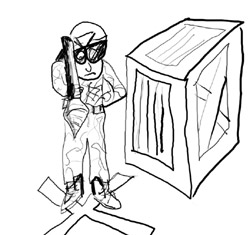 ♠ Circle-strafing has always felt like a nonsensical moonwalk-inspired action in shooter games -- try approaching someone at the mall and see how difficult it is to run in a circle around them while keeping your gun trained on them at the same time. I'm more inclined to believe the physics behind jumping on a high ledge by shooting a rocket at your feet and hopping, although if physics were truly involved, I guess either action would make you spill your Mountain Dew on your Doritos.

♠ Speaking of soda, Coke Zero has finally arrived at Costco, and I can now snub the twelve and twenty-four packs of Safeway for THIRTY-TWO packs at a reduced unit price. On one of my most recent trips, I bought two packs. I'm considering buying the entire stock and then bringing my own cans into restaurants that only serve real Coke. Surely there wouldn't be an uncorking fee if it's not already on the menu. 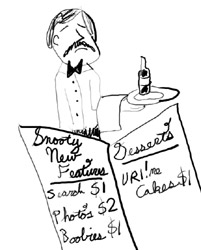 ♠ On this week's menu of inexpensive but underwhelmingly cooked new website features: I have posted photos from January in my Picasa album (also linked in the top bar) and the URI! Zone is now OpenSearch-enabled. If you have a reasonably modern browser that likes to clutter up your screen with useless gadgets and menu options, you can now edit the options of your search bar to hook it up to nine years of URI! posts (an Atom feed of the results is also available). This may be about as useful to you as tits on a fish, so rest assured that it wasn't done at anyone's behest -- it was merely a quick way to prototype a technology for work.

♠ Speaking of work, I was nominated for a "Great Place to Work" award. I presume this means that my constant teleworking and trips onsite make people want to come to the office more since they know I won't be there. At least my write-up was better than the winner of the "Diverse Business Base" award: "[he] developed a plan to penetrate a new customer, and he successfully executed the first stage of the plan and captured a 3-year contract that starts with 2 people supporting the [...] customer -- and grows from there." HR really should have caught the unfortunate choices of words in that text. 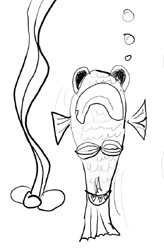 ♠ I actually think that tits would be much more useful to a fish than first impressions might suggest. After all, the Little Mermaid scored a prince with hers (she couldn't speak, so it obviously wasn't her intelligence), and things probably would have turned out much differently had she been top-half fish.

♠ I have no major plans for the weekend, although perhaps I'll host an impromptu game night on Saturday when the next blizzard fails to materialize so I can give away surplus toilet paper as prizes. We might also jaunt out to Front Royal to see Rebecca's cousin on Sunday. In the downtimes, I'll continue my current project of adding tags to all twelve hundred of my MP3s so they can be managed properly by iTunes.

♠ Illustrating these posts makes my hand hurt -- is it worth it? Have a great weekend!

A rare glimpse of the cave of crystals