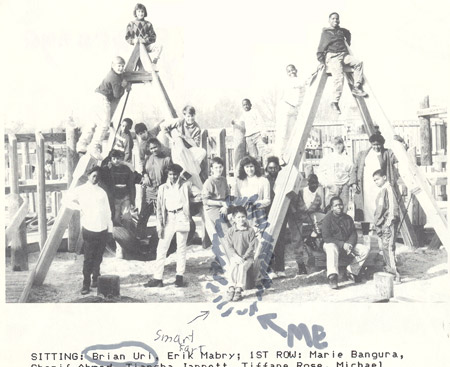 The interesting thing about a decade is not how much changes during that time -- it's how quickly the time went by. Since I've now been around for three, here is a look at the road trip of my life.

Thirty years ago, I was 0 years old, an age that is only interesting when you are in the denominator of a fraction, so let's move ahead a decade.

Twenty years ago, I was 10 years old and in Mrs. Turner's sixth grade class at James K. Polk Elementary School. We took our picture for the flimsy photocopied brochure that passed for a yearbook on the unapologetic death trap of a wooden castle playground from a non-litigious era. 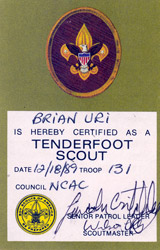 I had been a Boy Scout in Troop 131 for six months, and had recently risen to the rank of "Tenderfoot" from "Scout", which is a feel-good freebie rank that everyone earns upfront but which doesn't actually mean anything (see also, Employee Stock Option Programs).

In sixth grade, I wore velcro KangaROOS on my feet and a shark's tooth around my neck (the glasses were still two years away). Extracurricular activities included helping in the nurse's office, teaching after-school gymnastics, being a safety patrol, and one full year playing trumpet (which put me ahead of some Music Performance majors I knew). I had no strong aspirations for public office or careers yet, preferring instead to come home to play computer games with EGA graphics and copy simple game programs out of BASIC manuals.

Ten years ago, I was 20 years old and in my fourth year of college. We had just returned from almost not losing the National Championship at the Sugar Bowl, and I lived with Kelley in 3112 East Ambler-Johnston. At this time, I was a double major in Music Composition and Computer Science. I was also first chair in the Symphony Band, but only because none of the other good trumpet players were in it.

The coursework of the latter major actually got less useful as I moved up through course numbers, so I was sleeping through courses like "Public Speaking for CS Nerds" and devoting most of my time to composing songs like Loneliness. The only notoriety this song ever achieved was its 2002 use at Florida State University, where prospective composer candidates took turns ripping it to shreds in front of the panel, to prove that they knew how to be composition instructors.

On this specific day, January 20th, we'd just had a heavy snowstorm in Blacksburg which cancelled high school Honor Band. Since Honor Band had already pre-empted our regularly-scheduled classes, we had a free day. In the evening, we went to Jason Mirick & John Schurman's apartment in Foxridge and took turns sledding down the hill on stolen Dietrick trays and garbage bags.

I was still focused on doing the music thing at this point, but the template of my downfall was being drafted, and it started with a phone interview from FGM on Sunday, January 30, 2000. My qualifications for the summer internship was that I knew Jack Wilmer, and the interview lasted less than a half hour, because the Super Bowl was on and Fillipo wanted to get back to his party before the end of half time.

School staff gets insulin instead of swine flu shot

Love in London is a galactic equation for aliens