bringing about change like a 96 cent vending machine soda 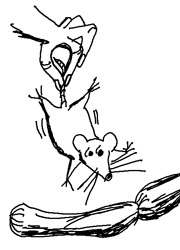 ♠ In the new features department, you can now hover your mouse over any of the links in my Bloglog to see the date when it was updated. I've also merged the "Friendly" and "Trendy" blogs into a melting pot, since I like to think that my cohorts are both friendly AND trendy, and this also makes it easier to publicly shame the folks who are behind on posting tidbits of their life for public amusement. If there are other blogs I should take a peek at, please let me know.

♠ The contents of my Bloglog have evolved over time, but I'm still trying to limit the number of funny picture sites I browse -- while they're all funny, there's just too many to keep up with. The next person who will become rich will be the person that aggregates the best content from all those mini update sites (like IMMD and

♠ "Aggregate" seems to be the word I say most often at work now, based on shifting trends in tech buzzwords, but it's not as stylish as "concatenate". Neither word is as fun as "cachinnate" though, even if Firefox flags it as a misspelling.

♠ Proofreading is only 5% of the yearly URI! Zone budget (much to the dismay of Finicky), so a fairly respectable number of typos and grammatical errors make their way into my posts. I can usually explain them away by pretending to have invented new words and sentence structures, which is a pretty rashucous thing to do unless you are the e.e. cummings of the blog world, as I am. 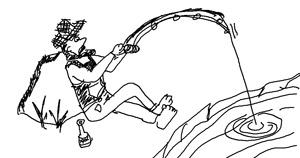 ♠ Poetry has never been an interest or a strength to me, because I find most poetry to be boring unless it's depressing. On the creative side, other than occasional disparate distichs or the repetition of limericks about the fisherman named Fischer from my youth, I would rather compose a giant chunk of prose with a literally large liter of liberal alliteration.

♠ Back in my roleplaying chatroom days (circa 1997), one of my characters was the Rhyming Couplet Kid, who didn't interact with any of the other characters in the game. Instead he just sat in the rafters and made up snide rhymes about the events around him. This was also the role I played in real life in high school, but without the rhyming. 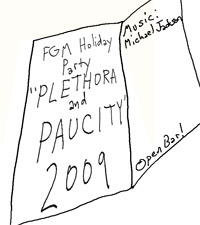 ♠ Plans for the weekend include the FGM Holiday Party which, thankfully, does not take place at the office, and doubly thankfully, doesn't have a retardedly unnecessary theme like "Black-White-Silver Gala" (2005) or "Fire and Ice" (2007), although there is an Ugly Sweater Contest which I won't be entering. I actually plan on attending this time (for the first and only time in the past decade), and hopefully some insane blotto boss hijinx will make it worth my while.