Friday was a low-key night -- I ate leftovers of slow-cooked beef seasoned with thyme, rosemary, salt, pepper, and Shiraz, and started watching the sixth season of 24 again (after a two year hiatus from lack of interest) while trying to sit down with the Ruby programming language. 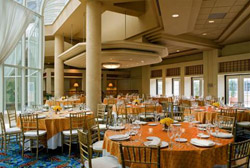 On Saturday night, we went to the Sheraton Premiere in Tyson's Corner for the 2009 FGM Holiday Party, which seems to get progressively later every year. I'm guessing that it will have a Valentine's theme within the decade. We did not win the "ugliest sweater" contest (because you have to wear a sweater to enter), but noticed a high number of folks risking confusion and possible ridicule by wearing a sweater without any intention of entering. We did, however, win an iPod clock/radio docking station (MSRP $99) which, given our lack of any i-themed devices in the house besides our iCebox, was destined to live out its days as a very expensive FM radio. 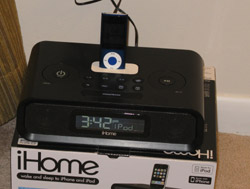 On Sunday, we simultaneously stimulated the economy and fulfilled the Destiny of the Docking Station by going to Costco and purchasing an 8GB iPod Nano, which is pretty sleekly designed, even if the video camera on the back seems like unnecessary feature bloat.

Following an afternoon spent dicking around with new gadgets, we picked up some moderately good Mexican take-out and visited Chris and Kathy, where we played a nerd game that involved building a railroad across pre-World-War Europe. I'm presuming that I won, since the scoring markers only went up to 100, and I was the only one that stayed below 100 with no overflow arithmetic errors.