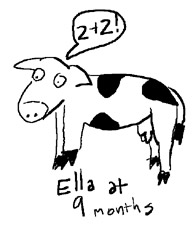 ♠ Today, I will be illustrating my Fragments column using the pen and tablet I got for Christmas. The technique is much harder than I expected, because you are looking at the computer screen for visual feedback so you can't look at the tablet. It's especially tough when you end a line and have to move the pen to a new location. My apologies in advance if I draw a picture of you and you end up looking more bovine than you normally would on a Friday -- I will improve!

♠ Maybe for a future update, I'll draw a picture both with the tablet and by hand, perfecting their beauty until they are completely identical. For now, these rejects from the Mini Pages will have to suffice. 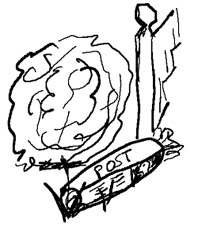 ♠ I was the recipient of two identical newspapers yesterday -- apparently my newspaper carrier feels that twice the news will make up for all the times that my newspaper is missing, or the four-day vacation stop during which the newspapers kept coming, identifying my house as a likely burglary target.

♠ Honestly, my house makes for a very poor burglary target, since there aren't ground floor windows concealed by shrubs, and my telecommuting schedule means that someone's almost always home. Plus, I keep all the expensive loot on the top floor in the secret safe behind the painting of the flustered chicken (combo: 34-44-25), so the ground floor variety of burglar would have to leave empty-handed if anyone were home.

♠ Our home was the target of an attempted break-in when I was a kid. Some clown smashed a basement window with a sledgehammer and then fled after realizing that there was an inner frame to break as well. This seems to be a pretty low threshold for obstacles -- the burglar's heart must not have been up to the task. I'm guessing it's similar to the guy who makes a New Year's resolution to run a marathon but then gives up after going to the shoe store and not finding anything in his size. 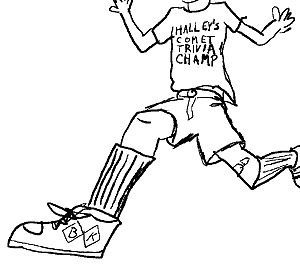 ♠ My favourite part of going to the shoe store as a child was using the foot measuring apparatus, although it never really mattered because the shoes rarely fit. Because my feet are wide at the end, it was often hard to find well-fitting shoes without getting them a size too big. Sometimes it took more than one trip to alternating Kenny's shoe stores to walk out in a fine pair of British Knights.

♠ The social calendar for the weekend is actually pretty light this week, consisting only of a Beer Club night on Saturday. I'll also probably make the usual trip to Costco for new slabs of meats and maybe pick up some running shoes in preparation for the imminent return of warm weather and exercise, although I, myself, seem to have a very low threshold for obstacles when it comes to exercise.