Like most young lads who grew up in the 80s before toys were a garish mash of retarded Power Rangers and Pokemon, the core unit of outdoor play was the Army Man. Arriving from China in thick plastic bags hanging off the ends of the aisles at Best Company in Shirlington, these crudely stamped lumps were probably the Chicken McNuggets of the plastic industry, but they provided hours of fun even if they were poisonous to touch or eat. 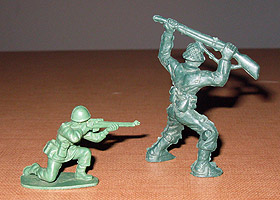 As a child of an economist growing up in the House of the Rising Sum, my army men never had any quality of craftmanship, but this was offset by the fact that I had millions of them -- every time there was a sale of 100 men for a dollar, that was the bag I received. On the plus side, this meant that I could stage battles of epic proportions, but the negative aspect of this was that the men in one set were a different size from another set, so I usually had to fight battles of giants versus dwarfs (or World War III: America vs. North Korea, as I would call it today). 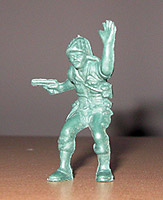 Each set of army men came in a basic set of poses. You had the radio man, the grenadier, the officer, the squatting shooter (which is also a toilet game in India), and the standing shooter. There were also several gunners lying in the mud, which could be "pretended" into wall climbers in a pinch.

One of my sets had the army man shown on the left, and it was either supposed to be a poor rendition of someone surrendering, or "The Todd" in Army duds perpetually frozen in high-five formation. Unfortunately, there was only one in the set, so he was left hanging for eternity.

Because most of the household toy-money was spent on Lego sets featuring two interlocking squares and eight thousand custom pieces that didn't fit into any other set, corners had to be cut in the outdoor toy arena. When I fell in love with a $60 army base with moving bridges and ramps, my dad built a base himself and painted it green. This product was probably more durable than the original but looked less like an army base and more like a two-story parking garage.

Later, there were no army men for sale, but there WAS a giant bag of red, blue, and black robots. This definitely did not appeal to my sense of play. In my world, there was no mixing Legos from different sets, or crossing the beams between history and sci-fi, and the robots were usually relegated to the back of the shed where they gathered spiderwebs and spricket poop. 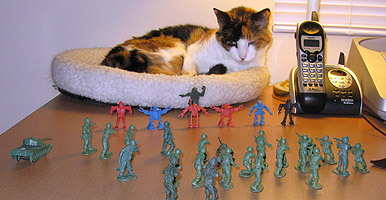 I still have a plastic bag containing a complete regiment of higher quality men, another regiment that looks like it barely survived the war with the plastic stamping machine, a few robots, and a battalion of Matchbox cars in the basement, and last night, they went on safari.

Cougars not welcome on Carnival cruises