I've recently begun reading the collected works of Terry Pratchett, a language satirist who everyone else was probably familiar with ages ago. Though it took me some time to get into the first two books, the third (Equal Rites) is quite the charming page-turner (and not just because it isn't separated into chapters). 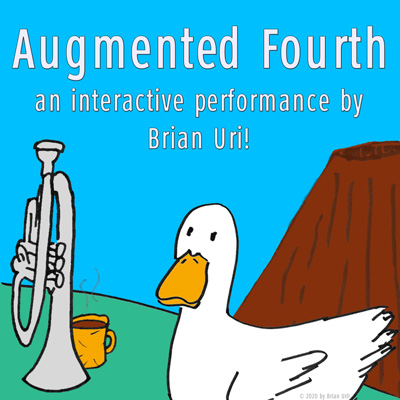 When I wrote my text adventure game, Augmented Fourth, while in college, it was often compared in tone to Terry Pratchett, and I can now see the correlation. After reading his first book at the beach, I took a renewed interest in the game I'd created (which is in a genre now commonly called interactive fiction, or IF, instead of text adventures) and put together a second release that fixes a few minor irritating bugs. If you've played it before, there's nothing terribly new to worry about, but new players might find an enjoyable diversion.

Augmented Fourth is similar to the classic Infocom games from the 1980s, in which you play a failed trumpeter who has been thrown into Orchestra Pit by a king who was displeased by your performance. From this muddy beginning, you type in text commands at a prompt, exploring the Pit, solving puzzles, and eventually gaining your freedom. When I first released it nine years ago, it was nominated for two awards and eventually made it on to a master list of suggested works of modern IF.

There are a few ways to get started if you would like to play:

Though I haven't been active in the IF community since the year 2000, I think I might be interested in getting involved again -- maybe I'll write a new game with all the free time I've gained from cancelling my Warcraft subscription!

Couple loses despite backing every greyhound