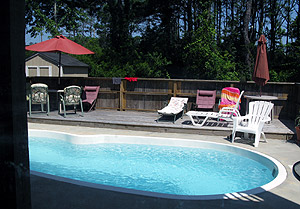 I have returned from the sunny climes of Nags Head, North Carolina, where the daily weather was a sunny 88 degrees with a slight breeze, and the local "Nags Hood" gangs haunted the ice cream parlors at night, looking like the love children of Eminem and Dennis the Menace.

We also discovered that a large quantity of the liquids we'd brought along had gone bad, fermenting into beers and wines over time, so we did the responsibly green thing by drinking them, instead of just throwing them away. (Because Dare County does not have a house-to-house pickup for glass and aluminum recycling, we also made sure to invite other people who cared enough about the environment to bring all the drippy bottles home with them, which is kind of like purchasing carbon offsets). 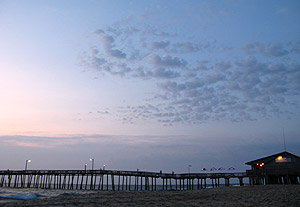 Our house (though a little too near to highway traffic) was perfectly positioned, with a three block walk to the beach, a habitually empty parking lot there for the lazy, and a two foot walk to the one-man-six-women hot tub and swimming pool. It was also just two blocks from Jockeys Ridge State Park, which we went to twice to catch the sunset. The clouds failed to cooperate on both trips, but we got some good dune jumping in, and also managed to wake up at least once for the beach-based sunrise.

On the last day, we sat on the beach with hundreds of other beachgoers and watched a very decent fireworks display off the pier -- sitting in the sand with fireworks going off directly over your head is much more enjoyable than trying to get to the Mall. 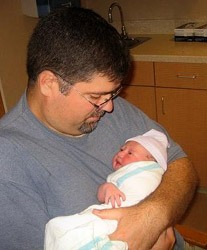 We got home after an eight hour odyssey that involved tons of SUV traffic, most of the back roads in eastern Virginia, and two wailing cats, and then I took yesterday off to readjust to the pace of Northern Virginian life and also to celebrate the birth of Kathy and Chris' daughter, Mallory Jean Smith. Congratulations to them!

Most of my Outer Banks pictures are up on Facebook, and they'll appear here towards the end of the month. I hope you all had a relaxing week in my absence!

Wallet stolen in 1982 found in a tree