To Be or Not to Be Fairfax County? 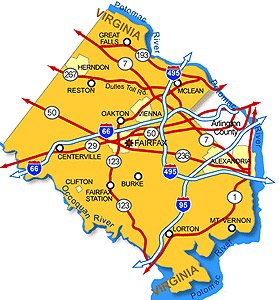 Fairfax County has long been viewed as the ultimate burb, where Washington goes to walk the dog and water the lawn. But the more residents look around, the more they see what many have tried to avoid: high-rise offices, blight, crime and housing that's more likely to have a balcony than a back yard. That changing reality came into focus last week when County Executive Anthony H. Griffin raised the possibility of officially making Fairfax a city [...]

For the uninitiated, a county generally has a larger land area but a smaller population than a city, and more roads that meet at oblique angles (or not at all, in the case of the ubiquitous cul-de-sac, which is French for "place that stops you when you're lost so you can turn around"). County-dwellers have the power to choose their own trash disposal companies while city-dwellers have more government-sponsored parades on holidays. Despite their differences, cities and counties both share a mutual hatred for cable monopolies, a similarity dubbed by linguists as "comcastic" in nature.

An immediate glance at any map of the sprawling county is enough to tell that it has about as much right to call itself a city as I do to call myself a purveyor of fresh seafood, even when there's a cooler in the trunk of my Accord. As the amorphous blubber around and between ACTUAL cities, Fairfax County isn't so much a city as it is a protective buffer zone for the City of Alexandria when the South rises again (and it WILL). This is also why Fairfax County includes a fake area called Alexandria -- to fool the Confederates into razing the useless Hybla Valley instead of a rather pleasant place to live.

More telling, though, is the fact that there's already a city by the name of Fairfax in Northern Virginia, and coexistence would be tricky, if not downright hostile. Charles Dickens was unavailable for comment. 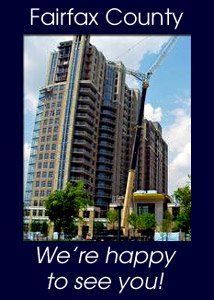 Regardless of whether the county changes its status [...] the discussion underscored a growing tension within Virginia's largest jurisdiction. What does Fairfax want to be? A giant urban expanse like many new Sun Belt cities? Or more of a residential suburb, with a handful of urbanized pockets sprinkled in?

Building on the imagery of majestic skyscrapers in urban pockets, the township of Reston has already started a tourism campaign, in hopes of attracting vibrant citizens who will vote in favour of cityhood.

For [some] families, Burke is their corner of suburban bliss, a community so complete that they rarely venture more than a mile or two beyond their homes. "It had all the ingredients that I wanted for my family," said Mary Holden, 46, a mother of four. "My kids' schools, their sports teams, their friends, the shopping -- it's all here. I can go a whole week not ever leaving Burke, quite happy." 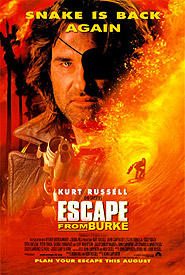 Coincidentally, the Opponents of the Intercounty Connector (OIC) have proposed an alternative plan to reduce road maintenance, which involves walling in all of these self-contained communities, greatly alleviating traffic on main highways. This would have the side effect of driving up tourism dollars if Kurt Russell could be persuaded to film a sequel in one of the new urban islands.

Holden and others probably would be quite unhappy if they ventured about 10 miles north to Merrifield [where] two sleek new five-story apartment buildings rise from a weedy parking lot. It's just that kind of urban feel that attracted residents such as Duy Anh Huynh. "I definitely think of Fairfax as a city. It's awesome, very vibrant," Huynh, 34, said [...]

In a poll of Northern Virginia residents, a solid 84% of residents didn't even realize that Merrifield was a real place. Of those, 78% found it amazing that Mr. Huynh was able to get all the way there without catching the more noticeable cityscapes such as Arlington, "the frickin' District of Columbia" or even the smaller diet-cityscapes like Shirlington. Said one respondent, "Dude must have fallen asleep on the Orange Line."

"What would you rather do, leave it the way it is?" asked Robert E. Lang, author of the book "Edgeless Cities" [...]. "It's neither fish nor fowl. They are going to be out-citied by Arlington and out-countried by Loudoun."

Left out of Lang's quote was his assertion that they would also be "out-tooled by Montgomery County", but this comes as no surprise since Maryland has a higher tool ratio per capita than any state on the East Coast besides New Jersey. Fairfax County is a very distant fourth.

The one typically urban issue Fairfax is grappling with is neighborhood blight. [...] Some areas, such as the partly vacant mall in downtown Springfield, have developed such an unsavory reputation that several of the mothers in Burke said they do not allow their teenage children to go there.

Said Mary Holden, "It was bad enough when they had the Babbage's there with all those floppy disks of devil games but how can you pretend an Orange Julius is benign? Didn't OJ kill his wife or something?"

Still, the city label doesn't quite fit for some community leaders. [...] "I think the county form serves us pretty well," [Supervisor John W. Foust] said. "Future growth will be more urban, but we've got a huge population that has chosen a suburban model."

"And since maybe 3% of county residents can competently drive their Suburbans in a straight line, " continued Foust, "do we really want to see the unfortunate results of an upgrade? I think not."

Bellies and Baseball: A Salute to Pregnancy