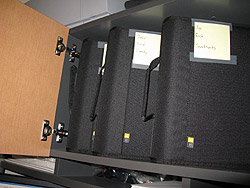 This weekend was a mix of relaxing and administrative activities, starting after work on Friday with the organization of my 500 CDs into three new CD binders. Previously, most of my CDs were jammed into a ratty case older than some fourth graders which was never designed to hold so many. At capacity, it resembled a fat kid in a Speedo, and weighed more than Booty.

On Friday night, Rebecca and I had sushi, and even experimented with a weird seaweed/jellyfish salad which was weirdly weird. It's tasty, if you can ignore the rubber-crisp texture, which tasted like someone had taken one of those spindly rubbery wall-walkers from a cereal box and deep fried it. 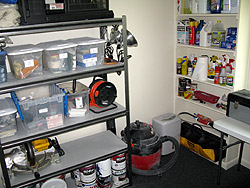 Saturday was quite the relaxing day, starting with the organization and labeling of home improvement supplies in my storeroom and ending with several hours of research into Interactive Fiction programming. I've decided to resurrect an abandoned piece I started writing back in 2000 called Robin Caruso, which is written in Inform 6 and is actually over halfway done already, instead of diving straight into learning the new Inform 7 language. My hard drive is already littered with the crushed ash butts of my unfinished projects, and after rereading the plot manifesto I'd laid out, I actually got excited about completing this project.

On Saturday night, we made beer-cheese soup, which may have been sabotaged by our decision to use American Ale and Sharp Cheddar. It was great as a dipping sauce for expensive breads, but more like toe-cheese when consumed alone. 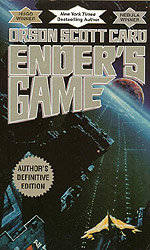 Sunday was spent at a barbeque, where we hung out with Rebecca's coworkers, ate stuff, and played traditional party games like Apples to Apples and Loaded Questions. We left there around 5 so I could come home and work. I also started and finished the book, Ender's Game, another one of those long-known classics that people mention so disgustingly often that I rebelliously never get around to reading. I'll post a full review on Thursday, but it was good enough to keep me reading through the end. The book was a good recommendation by Mom, but she also recommended the Lord of the Rings trilogy which I HATED more than creamed corn on peas.

What did you do this weekend? Discuss.

Which Lord of the Rings product line is the best?