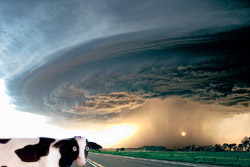 The Department of Homeland Security relied on a rushed, flawed study to justify its decision to locate a $700 million research facility for highly infectious pathogens in a tornado-prone section of Kansas, according to a government report.

The aspect that initially brought this to the GAO's attention was DHS's plan to harness tornadoes as a natural centrifuge as well as creating new samples of pathogens. "You'd be pretty mad too, if you were a cow in a tornado," said one analyst responsible for the recommendation (and who also maintains a personal website that insists Wizard of Oz really could have happened).

The department's analysis was not "scientifically defensible" in concluding that it could safely handle dangerous animal diseases in Kansas -- or any other location on the U.S. mainland, according to a Government Accountability Office draft report obtained by The Washington Post. The GAO said DHS greatly underestimated the chance of accidental release and major contamination from such research, which has been conducted only on a remote island off the United States. 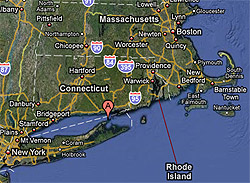 It's comforting to realize that current pathogen research is done "on a remote island", until the article's later revelation that the location is just two miles across the sound from Long Island in New York. Government officials downplayed the risks, noting that Atlantic winds would probably blow diseases into Connecticut (and eventually Lowell, Massachusetts), avoiding the higher population centers around New York City. "No one actually knows anyone who lives in Connecticut," reasoned another spokesman. Indeed, posing the question on the street in Sterling only provoked blank looks. "What about that Yankee guy?" asked one participant in the impromptu survey. 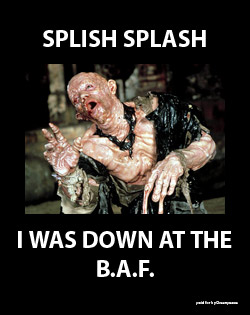 The criticism of DHS's site selection comes as the proposed research lab, the National Bio and Agro-Defense Facility (NBAF), was expected to win construction funding in the congressional appropriations process.

Greenpeace of Kansas has already seized upon the laboratory's acronym for their latest poster campaign.

A Texas consortium that hoped to lure the DHS facility to San Antonio argues that the agency has wasted millions of dollars trying to justify its choice [...] "They call it 'Tornado Alley' for a reason," said Michael Guiffre, an attorney for the consortium. "This really boils down to politics at its very worst and public officials who are more concerned about erecting some gleaming new research building than thinking about what's best for the general public."

When told by his assistants that the population density of Texas is 2.5 times higher than Kansas, Guiffre shrugged dismissively. "Texans are tougher."

GAO's draft report said the agency's assessment of the risk of accidental release of toxins on mainland locations, including Kansas, was based on "unrepresentative accident scenarios," "outdated modeling" and "inadequate" information about the sites.

Because of computer date formatting issues, DHS analysts who believed they were using the latest published data from '04 were actually looking at the notes from 1904. As such, their conclusions that "exiting Kansas by covered wagon is not a viable vector of travel for the West Nile Virus" are patently false.

Imbuing your child with perfect pitch

Smart machines: What's the worst that could happen?