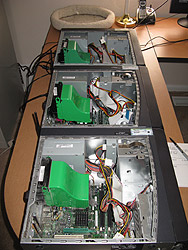 ♠ I'm in the process of overhauling our home network, because there are far too many computers to maintain (four desktops, two laptops, and a netbook) and I don't want my house to start resembling the Math Emporium. And since my computers have been assigned animal names, I can say that I'll be cannibalizing llama for spare parts to beef up koala, and I just installed Debian Linux on puffin. I'm planning on switching over most of my archival computers to Linux, although I'll keep my main desktop on Windows XP for gaming.

♠ Speaking of gaming, I cancelled my World of Warcraft account again a couple weeks back, because I hadn't played it seriously since late May. This is my second cancellation, since I originally played it for two years, took a year off, and then reactivated for a year and a half. If my life were an SAT pattern, it'd probably mean that I'll start up again in about a year's time but only play for another year.

♠ Filling the void left by WoW, I've been reading some Terry Pratchett and playing through some older Nintendo DS games -- New Super Mario Brothers is still excellent, and Yoshi's Island is still more frustrating than finding a close parking space at Wegmans on the weekend. I haven't replayed any Zelda games, but honestly, you can pick up any one of them and get the experience of playing them all -- sit through an uninterruptable cutscene, learn from a fairy that pressing UP makes you go up, and make bigger triangles out of smaller ones.

♠ There's a triangular construction site at the intersection of the Toll Road and I-66, which is a staging ground for building the Horribly Overpriced Tycoon lanes, probably filled with many expensive building materials. Two sides of this triangle are ringed with barbed wire fence, offering a great deterrent against theft. The last side is just Jersey barriers. I'm guessing that VDOT security is just inept, although I'm secretly hoping it's an elaborate trap for copper thieves, in which the barbed wire sides will close in like an industrial Venus flytrap. 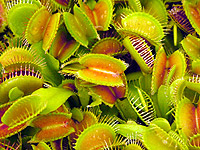 ♠ I had a tiny Venus flytrap as a kid, but I think it was mostly domesticated since I generally had to cripple the fly myself and drop it in the plant. Without my aid, it would have been just a Venus anttrap, which phonetically sounds more like a cute Swiss actress than a fierce carnivorous plant.

♠ Speaking of cute, the other day, I saw the license plate, IMAQTPI, on a Jeep. Did you really need to put that on a license plate? Couldn't you have just gotten a novelty keychain license plate and put your sorority house keys on it? No one on the Beltway cares if you're an attractive private investigator.

♠ The Beltway is really ugly now that all the trees have been razed for HOT lanes. I'd imagine the feeling you get from seeing it would be like the first time your girlfriend shaves her head "to be different". Rebecca, please keep your hair and remain a QTPI.

♠ Have a great weekend! Don't forget to vote in the caption contest before Sunday!

Attorney's million dollar dare comes back to haunt him

World of Goo arrives in Alaska