soon to be published in audobook format and Braille

♠ The latest addition to the real-life URI! Zone is a hand-me-down 52" TV from my parents, who are constantly questing to partition the rooms of their house with bigger and better TVs like Japanese Shoji screens but with liquid crystals instead of rice paper. The artifact correction algorithms in this TV are so advanced that DVDs of Arrested Development look exactly like a true documentary and even over-the-air LOST looks like a wholly different show, closer to a 3D soap opera than an antenna broadcast.

♠ With a TV that functions this strongly in the image department, I still have zero interest in ever upgrading to a Blu-ray player, in spite of the constantly playing ads at Target which promise me that I can access the movie's menu WHILE THE MOVIE IS PLAYING! GOODNESS! EXCUSE ME WHILE I LOSE CONTROL OF MY BOWELS IN EXCITEMENT.

♠ If I had my way, DVDs wouldn't even have menus. Or previews. Especially previews for movies on DVDs for TV shows. And being able to reach the menu while the movie's still going is about as useful as being able to read the menu at Applebee's after I'm already eating my dinner. 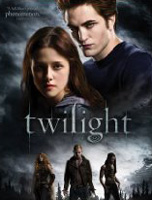 ♠ The only problem with me (and everyone else in the world) not buying Blu-ray discs is that the unpurchased inventory now clogs up the aisles at Costco like a microcosm of the real estate market. You can barely roll your cart down the aisle past the sample-hogging soccer mom without knocking a few off the shelves. However, the number of Blu-ray discs pales in comparison to the number of copies of the movie, Twilight, sitting on the shelves. 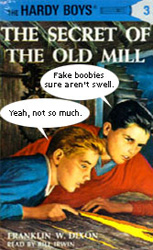 ♠ Having been blessed with a Y chromosome and a diploma dated in the twentieth century, I don't really understand what all the fuss about this movie is. Last weekend, we were browsing in Books-A-Million, the bookstore for European immigrants who inappropriately place their adjectives after their nouns, and of the twenty-five yards of Young Adult books, a solid 80% were vampire books. Gone were the Gordon Kormans and Sweet Valley Highs of the previous generation, replaced with this forgettable tripe. My kids are just going to read the Hardy Boys until they're twenty-four -- there were no kids biting other kids, except when Chet got unusually hungry in Book 54: The Mysterious Caravan.

♠ Plans for the weekend include laying ceramic tile in the basement bathroom, a dinner in Herndon, and some tax-doing, which I never quite got around to the last time I put it on my To Do list. In general though, that's how my To Do list rolls.

♠ Please note that I did not actually lose control of my bowels during the writing of this post -- it was merely a dramatization. Have a great weekend!

Walk it off, it's only a heart attack

Headmaster: No vampires at our school