In the last two years of the 1980s, when Becca was either not yet born or incapable of walking under her own power, computer games were slightly stagnant. Infocom had been bought out by Activision, so text adventures were on their way out, and Sierra's "Quest" games were just starting to rise. For a kid who thrived on computer games (and who did not own a Nintendo until the 90s) this dearth of games resulted in some interesting, yet horrible, purchases.

The number one rule when it comes to buying games is that you never buy a game based on a movie or a TV show, because it'll be nothing but a sodden lumpy mess of corn feces, crafted solely to steal money from parents. Unfortunately, it took awhile to learn this lesson. 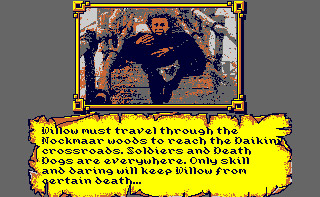 As a child, I probably watched the movie, Willow, over a hundred times. Today, all I can remember about the plot is that a short guy had to carry and protect a baby and could never leave it behind or bad things would happen (this is also the plot of any Family Life class with a flour-bag baby). This game consisted of lots of exposition on scrolls, and horribly degraded movie stills shown in 4-colour CGA. The first level had you running across an overhead map while being chased by Death Dogs. 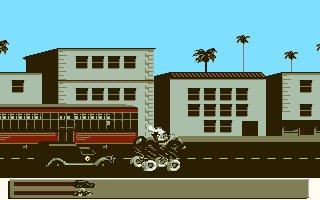 Who Framed Roger Rabbit? was released in 1988 on the PC, and came with a whopping FOUR levels. Level one and three were side-scrolling racing ventures where you tried to drive Benny the Cab down the street while jumping on buildings and avoiding oil slicks. In level two, you had to grab napkins off tables while penguin waiters put more down, without getting touched by a penguin (which would get you ejected from the club and force you to start the whole game over). The last level had you wandering through the Acme Factory using the Singing Sword to fight bad guys.

With only four levels, you'd think this game would be over quickly, but the controls were so horrible that you might as well have been a handless Saudi thief trying to play Dragon's Lair. I'm not sure if I ever actually beat it. 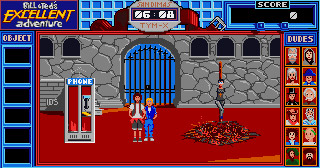 The last game I ever bought based on a movie was Bill and Ted's Excellent Adventure. In this game, you had to travel through time in a phone booth clicking on famous people so they would join you. The game had primitive sound capabilities, although the entirety of the sound effects was a clip of "Excellent!" and a clip of "Bogus!". I beat this game within 20 minutes of installing it, and was so crestfallen that my dad agreed to return it to the store, telling them that it didn't work on our computer because of the copy protection.

The Mad Libs game wasn't based on a movie, but I just recalled it the other day when Rebecca found a Mad Libs book in a bargain bin for a dollar. This game came with only 4 Mad Libs stories, which led to surprising replayability since you could eventually remember where the words fit in and write a sensible (and usually dirty) plot. The highlight of this game was that it had a primitive-text-to-speech convertor that would read the stories aloud after you submitted your words. Unfortunately, the convertor did not understand phonics very well -- as a teaching tool, it just taught us to spell the word any way possible so it would sound right when the robot read it. We also may have taught the robot to swear.

What were some memorable computer games from your younger years?

Bat stows away on the space shuttle