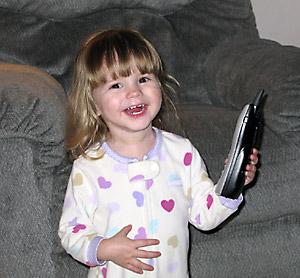 The weekend opened with a round of emergency babysitting for Ella, who spent four hours making prank long-distance collect calls to Guam and smashing houses made out of foam blocks like a petite Godzilla. In our time together, I taught her that 3 + 3 = chicken, couches are for back flips, and girls are bad at math and science.

On Saturday morning, my dad dropped in for the final round of tile-laying. I had originally planned to tile the basement bathroom back in 2007 when we did the other two, but just never quite got around to it, much like the marathon I had planned to run in and the testicular cancer I was going to cure. We were only short by one tile at the end, which meant that estimation skills have improved over a two year period (since we had an entire box of tiles left after the upstairs bathrooms).

We finished in the bathroom around midday, after which I steam cleaned the upstairs carpets to make it less hobo-y and more homey. For dinner, we met up with Marc, Annie, and Erica in Herndon. The restaurant we were aiming for, Sweet Basil Cafe, turned out to be closed, so we ended up at a Thai restaurant underneath the ridiculously fake Clock Tower instead. Afterwards, we watched a repeat of Saturday Night Live, which was mostly lame with a chance of inspiration.

Sunday was Tax Day, where I signed up for several thousand dollars in refunds and tried to convince the IRS that Hurricane Katrina had a second part and that it hit Sterling in 2008 so I could claim the disaster relief credit. The weather was so pleasant that we then decided to go on a bike ride up the W&OD trail towards Ashburn, but by the time we'd finally gotten off our asses, a thunderstorm was brewing. We only made it about four miles out before we had to turn around to avoid lightning strikes. After warming up, we started working on our Wedding Registry, which will not be lame and full of crap that no one ever uses.

For dinner, we had shells and cheese, and all was good in the world.

A bobcat walked into a bar