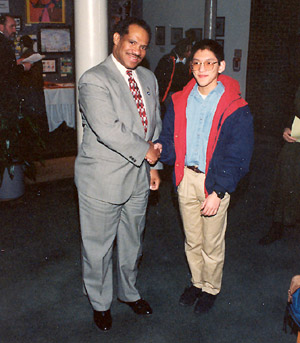 I wrote the following story for the city-wide Reflections contest in 1995. The theme and tagline of this contest was "Just Open Your Eyes...", but I doubt they expected it to be treated in a snarky manner. In spite of this, I got second place and got to shake the hand of one of our esteemed City Councilmen.

Deep in the savannah, there lived an ant. Now this was not your everyday ant. He resided in a cairn of pebbles at the base of a plant. Since he lived in the savannah, he had seen many wild and majestic beasts. But one day he told me that he'd never seen an elephant.

So after tidying up his home, he packed his bags and left his plant in search of an elephant. Being an ant, of course, he had trouble seeing things that were high above the ground. He wandered through the savannah for several days and finally came to a halt at a spring.

"Excuse me," the ant said to the monkey who squatted by the water's edge, "I am looking for an elephant. Do you know where I can find one?"

The monkey swallowed a draught water and replied, "Head away from the water's edge towards those foothills and you shall find a herd of elephants. You cannot miss them."

The ant thanked the monkey and went on his way. He soon left the pleasant atmosphere of the savannah and entered a jungle. These trees had trunks which were much thicker than any the ant had seen in the savannah. And being an ant, of course, he couldn't tell how tall the trees were since they were so far above his head. He wandered through the jungle for several hours, and after so much walking, he felt that he deserved a quick nap. So he crawled to the base of a tree and slept. When he woke up, he stretched, yawned, and wiggled his antennae.

About this time, a beetle happened by the ant. "Excuse me, beetle, I am looking for an elephant. Do you know where I can find one?"

The beetle looked at the ant for a moment and then pointed up. The ant nodded. "I see, The elephants live up in these trees. Thank you for you help." But the beetle had already left, evidently in a hurry to get his errands done.

The ant crawled up a tree trunk in search of elephants. Vines occasionally swished past the trees. Sometimes, he could feel the air disturbed by the steady swaying of vines. At the top, he found himself on a gently rolling plateau.

This tree must have brought me up to a cliff, thought the ant. So he continued his search, but found no elephants. By now, he was getting cross at the monkey and beetle, who had led him astray. A grey bird settled on the plateau near him and the ant scurried closer.

"Hey, grey bird," the ant said somewhat shortly, "do you know where I can find an elephant. I have been lied to by a monkey and a beetle who said that I could find one up here."

The grey bird looked at the ant in surprise and trilled a sudden laugh. "Ant, you were not led astray. The elephant is right before you."

The ant swiveled his head around but saw nothing but the plateau and the bird. "You are lying! I see no elephants, only a plateau and you, grey bird."

The bird cocked its head to one side. "It is right before you. Just open your eyes and see."

"I am! And I see no elephants anywhere!"

"Ah, but that is because you are only seeing what you wish to see. You are blind to that which is right before your eyes." And with those words, the bird flew away.

The ant was angry. "I have journeyed for days and climbed trees to find elephants, but all I have found is the mendacity of my savannah neighbors! All of my hard work has been for naught. I'll bet that there is no such thing as an elephant."

And saying this, the ant climbed back down the elephant's leg and returned to his home in the savannah.

Award for parrot that warned of choking baby