an unlucky case of d?ja vu 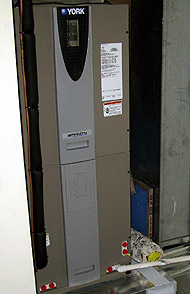 ♠ The latest change in the real-life URI! Zone is the complete replacement of the heating and air conditioning system. The work was done efficiently and reasonably priced by Cascades Comfort Services, and when the new system spins up to heat the house, a high-tech whirring excites the ears, like you just stepped onto the Tube.

♠ Speaking of Tubes, work has started on the Silver Line, so the Metro will extend out to Wiehle Avenue by 2013, and that location will have more going for it than just being a made-up word in Boggle.

♠ I'm hoping that the station there also gets an exotic sounding pronunciation, like "Vi-elle" (Virginian for viola) -- the actual pronunciation is "Wheely", which sounds too childish, like the refrain of a campfire song. 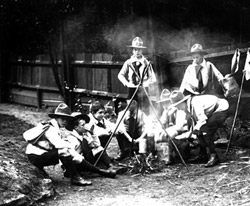 ♠ When we went on our monthly camping trips to Spotsylvania as Boy Scouts, we had to sing all sorts of ridiculous songs, like Ging Gang Goolie, which was invented by the father of Scouting after listening to African tribal songs. Sounds a little racist if you ask me.

♠ We had baseball caps, not Smokey the Bear hats like the Scouts in the photograph, although there were two unfortunate years at the very beginning where we had berets. There's nothing that says "hardened wilderness survival expert" like a jaunty red beret.

♠ I actually earned the Wilderness Survival merit badge, although the "final exam" for it was pretty weak. Armed with only the supplies we might have if we had crash landed far from civilization (which included, but was not limited to, a sleeping bag, flashlight, canteen, trail snacks, a Swiss Army knife, and a change of clothes) we hiked about a half mile away from camp and built lean-to's out of fallen branches and leaves, then slept there overnight.

♠ I was more concerned with getting bugs in my sleeping bag than survival.

♠ Plans for the weekend include a visit from Rebecca's relatives who are in town for a couple days. I may also do my taxes for the last time as a single guy, which shouldn't be terribly difficult since I've had the same job for years and my mutual funds are roughly worth a pair of pants in Burkina Faso at the moment.

The officer who posted too much on Myspace

A woman who allegedly intended to artificially inseminate her wife with her brother's semen has been charged with domestic assault and battery.