it's time for your sea sponge bath

♠ Congratulations to Kathy Smith who successfully defended her dissertation and is now a doctor! I don't know what her research was on, so I'll presume it was on The Overuse of Vowels in the Lyrics of Modern Music.

♠ Now that Kathy knows everything there is to know about music, she's going to have to find something else to do with her time. I recommend pitching a dramatic sitcom like Grey's Anatomy but with people from music academia. The music history geeks would sit at their own table in the cafeteria, and the angsty theorists would constantly misdiagnose scores and think they'd discovered a very rare chord. Meanwhile the handsome composers would hook up with all the first-year music majors. The show would either be called "Piston's Harmony" or "Schenker? I Barely Know Her".

♠ Walter Piston's harmony book is another waste of money book on my shelf that I've never actually opened. Computer-related textbooks may be far more expensive, but at least I read all of those cover-to-cover -- except for the classic Rapid Development text. I already went through puberty, so I figure, why bother? 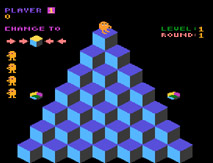 ♠ Q*bert was one of about four games we owned for the Atari 2500 in the early 80s. You played as the spawn of Gonzo and Pac-Man and had to hop around some cubes to change their colours. I bet (and hope) that there was at least one adult-themed rip-off of the game called Pubert. Would the game's protagonist have been an actual pube, or would Gonzo Jr. have hopped around changing the colour of various pubes? 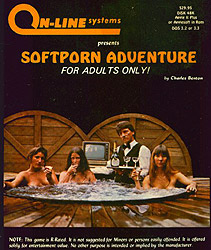 ♠ The concept of an adult-themed game in early video game history is unintentionally amusing. While doing research for Wednesday's post about old games (because even non-Doctors do research sometimes, and not just typing something in Google a second time), I came across "Softporn Adventure", an early text-only adult game from the company that would eventually become Sierra On-line. In fact, that's Roberta Williams, creator of King's Quest, on the far right in the hot tub. I guess a text adventure would leave more to the imagination than trying to create naughty graphics with only four pixels.

♠ There are no hot tubs involved in my weekend plans, although there may be some parties and Mike's LovePoker, although poker is dependent upon Mike (of Mike and Chompy) being able to correctly read a calendar and determine which date he chose. In the past, this has involved a success rate of about 22%.

Middle schoolers have a new form of peer mediation

Reconstructive crocodile surgery is a waste of money

Eating produce could be hazardous to your health