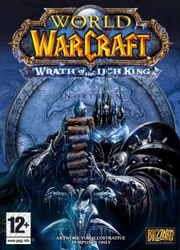 Wrath of the Lich King (WotLK), the second expansion pack to World of Warcraft, was released last November, just under two years after the first pack, The Burning Crusade. It increases the maximum level from 70 to 80, adds a new playable class and a continent full of fresh quests and exploration. I picked up the game a week before Thanksgiving and have been experiencing it at a leisurely pace, not unlike Kathy's trek to her dissertation. I decided to hold off on my review until I had completed every single quest I possibly could (except for those taking place in dungeons that require more than one person).

Exploration
WotLK introduces the continent of Northrend, a snowy vista with Norse tendencies that makes exploration a joy again -- I had as much fun exploring as I did when I first bought the game in 2004. The continent gradually increases in scope and majesty as you travel, until you reach mountains that are taller than some entire zones from the old world. Having a swift flying mount is very helpful (and you'll loot enough gold in Northrend to pay for it if you don't already own one). 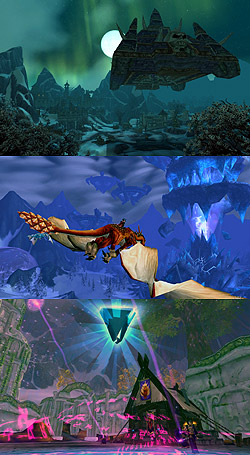 The quests you perform are varied and numerous, and you'll reach level 80 long before you run out of quests. Though most of the quests follow the same basic mold (kill 10 penguins, find the magic doohickey and give it to someone), they don't feel as tiresome because of the introduction of "vehicles". You spend many of the quests on the back of a dragon or in a gnome-invented helicopter, and each of these vehicles has its own unique skillset to learn -- it sometimes feels more like you're playing a round of Mario Party mini-games instead of questing.

Death Knights
The new playable class is the Death Knight -- billed as a hero class, it is easily stronger than a comparable normal class at the same level. Though I didn't play the Death Knight very far beyond the starting zone, I found them to be mostly boring and overpowered (they're especially annoying in PvP Battlegrounds where they have an immediate advantage over all the other characters).

Graphics and Sound
The graphics are surprisingly nice for a game that's now four years old -- the graphics engine has been tweaked and the system requirements are now a little higher. If your computer barely ran the original game, you'll definitely need to upgrade a bit before visiting the busier areas of the expansion pack.

The music is very well-done -- before I would always turn off the music immediately, but the style of music in Northrend is understated and pleasant to listen to. It's also a little more adventuresome than you'd expect from a computer game, with some sections sounding like excerpts from a contemporary piano recital.

Bottom Line:
This expansion pack is much more polished and enjoyable than the previous one, which occasionally felt like a hodge podge of unrelated new content. There is nothing in here that will make it worth buying if you dislike the core gaming concepts behind the game, but if you already enjoy the game, you'll enjoy this as well.

It's the economy, girlfriend

Cello scrotum exposed as a hoax