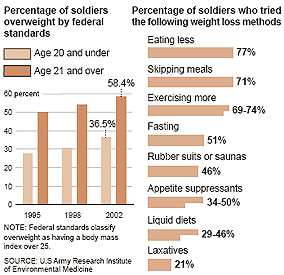 The Army has been dismissing so many overweight applicants that its top recruiter, trying to keep troop numbers up in wartime, is considering starting a fat farm to transform chubby trainees into svelte soldiers.

The Army tried a similar approach with a series of "Don't Be Gay" camps in the mid '90s, although the success rate from those camps was 0% -- by attending the camps, young people were implicitly breaking the "Don't Ask, Don't Tell" rules and forced to leave the service.

[Maj. Gen. Thomas] Bostick told The Associated Press that obesity looms as "a bigger challenge for us in the years ahead" than any other problem that keeps young people from entering the military, including lack of a GED or high school diploma, misconduct or criminal behavior and other health issues such as eye or ear problems. 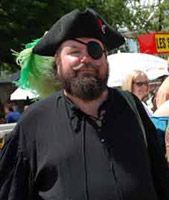 Based on complex computer simulations of this data, various draft-dodging websites have now reported that the least draftable profession would be that of a fat deaf pirate, because of their girth, eyepatch, lack of formal education, and their antisocial thievery.

It seems like they're taking the incorrect approach in the Marine garden -- instead of growing MORE Marines, they should just be growing bigger ones. Servicemen who have a few extra pounds will seem more intimidating to the enemy, and come with their own built-in body armor that's much cheaper than standard issue. With a little scientific research, we could create an army of obese soldiers with plenty of padding and an impenetrable exoskeleton. The Army's R&D branch states that they are already making progress in this arena, although they are currently waiting for the patent to expire on KFC's Extra Crispy recipe.

Obesity afflicts recruits for other physically demanding jobs, including firefighters. Deputy Chief Ed Nied, chair of the safety, health and survival section of the International Association of Fire Chiefs, said fire departments are also making a "major push" to encourage better fitness among young people who want to join. 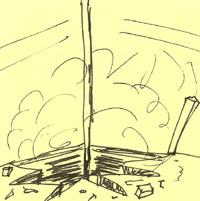 Deputy Chief Nied is rethinking his "major push" approach after hearing reports about the detrimental effects on firehouse floors from obese firefighters who were pushed down the pole.

[...] Bostick said a slim-down camp could be part of the new Army Prep School at Fort Jackson, S.C. The school opened in August, and gives recruits who didn't graduate from high school the chance to earn a GED before starting their nine weeks of basic training.

It is at this camp where recruits retake the classes they failed in high school. Real life applications are stressed, such as geometry lessons on pyramids, and peer mediation lessons about friendly fire.

"We are getting heavier as a nation as far as our young people are concerned," [recruiter Darryl] Bogan said.

Bogan's conclusions are based on a recent study that shows that obese Americans now outweigh the merely overweight which put large people on one side of a scale and larger people on the other, then determined which side weighed more. The rest of the research grant was spent on alcohol and women.

One of Bogan's recruits, 18-year-old Idalia Halley, was shocked when she found she was a few pounds too heavy to enter boot camp. [...] On her second try, Halley said she weighed in at 162 pounds and logged a 30 percent rate of body fat to meet the Army's standard. "I know I've lost some weight because I have to pull my pants up tighter," the Army private said. "And besides, I don't think the food's all that great ? except breakfast."

In all likelihood, the Army could increase the number of recruits, simply by advertising how good their breakfast is. Everyone loves breakfast, even skinny people.