the underpants of the Internet 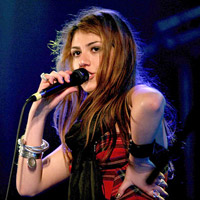 ♠ A song that I'm currently addicted to is Sweet About Me

by Gabriella Cilmi, yet another artist from the "my-voice-is-way-too-mature-for-the-fact-that-I'm-only-sixteen" ranks (like Joss Stone). I first heard it on XM Radio, and have been repeating it regularly ever since I downloaded it.

♠ Even though it currently stinks, I've decided that I'll renew my XM subscription for another year, because CDs get old and I can't imagine actually learning how to use the old-fashioned radio to find songs. This is more important now that my CD player sounds a little staticky, following the electrical problems I had last week.

♠ It turns out that my battery had become completely drained last week (damned car vampires) which meant that it couldn't even be jumpstarted successfully. Now that the new battery is installed, the car starts incredibly fast -- to the point where sometimes it revs up as my key is moving towards the ignition. I'm now out the cost of labor and towing, but maybe I can win it back at poker. 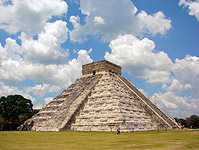 ♠ This weekend marks the first game in the 2009 URI! Poker Tour, although kitchen size necessitates a smaller pool of players. Generally, we play Basement Poker where ten people can comfortably play together (nine if someone has EXCEPTIONALLY BIG... blinds), but in the cold winter months we move upstairs for Kitchen Poker. Maybe this summer we'll brave the mosquitoes on the back porch for some Itchin' Poker (and when we start our world tour -- Chichen Itza Poker).

♠ When I was a yuppy child who owned every single Choose Your Own Adventure book, Chichen Itza featured prominently in book 11: Mystery of the Maya, though I pronounced it as "Chickenitsa" which might also be a pasta dish. This book was only memorable for two reasons: it had really horrible illustrations (almost as bad as the ones in From the Mixed of Files of Mrs. Basil E. Frankweiler, where the title character's head looks like the cross between a Cabbage Patch Kid and a cirrus cloud), and the illustrations suggested that YOU, the reader, might be a chick. As if chicks could read back then.

♠ Speaking of chicks, our wedding date has been set for October 3, 2009. The wedding colours will be puke puce and parchment yellow, and the ceremony will be officiated by Ella.

Galileo the test case for requiring vision tests of the elderly