devolving the week into fragmented chaos 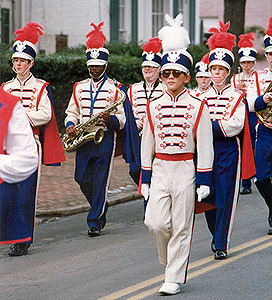 ♠ Someone started a Facebook group for T.C. Williams High School Marching Band alumni this week, so I've been busy scanning and uploading a bunch of embarassing photos and reconnecting with long lost members. People in the band were obviously the coolest kids in school, despite the fact that the uniforms made us look like we were in a live action production of the Nutcracker.

♠ In my senior year, my dad was the defacto band photographer, and it was my job to take the most recent week's set of pictures to the band room and post them on the bulletin board. Kids could buy their favorite prints for a quarter, and since I was also in charge of sales, I would try to put the ugliest and most horrible pictures in prominent places to increase the profits. I made at least twenty bucks in two months.

♠ Twenty bucks wasn't too bad for so little effort, especially since I didn't have a regular job until college. My spending money in high school came from three different sources: a monthly allowance of about thirty dollars, periodic stage crew gigs with the Alexandria Symphony, and the elderly neighbour that insisted on paying for weekly yard work even when it was emphatically clear that work had not been done.

♠ In college, my income actually declined, since my summer job was the dead-end internship at PEPCO for $200 per week after taxes. I would not get paid so little again until I became a graduate assistant at Florida State. Truthfully though, I was overpaid for the first year's assistantship since I was helping to run a computer music lab that did not actually exist. Jobs with no work are the best.

♠ Plans for the weekend include a trip to Arlington tonight where Rebecca will reconnect with a bunch of Grinnell alumni and reminisce about how flat Iowa was back in the day. On Saturday, I'll have to do some hardcore web development to jump start our wedding site, since we'll be out in Purcellville on Sunday at the winery, signing contracts and finalizing the wedding date. Once that's out of the way, we can move on to the fun stuff, like determining which Bach piece with Ocean Sounds will be played, and who's going to jump out of the cake. Any volunteers?

Husband wants his kidney back