♠ Yesterday on the way to work, I saw a flashing highway sign that said "DRIVE HAMMERED, GET NAILED" and was sponsored by the Fairfax County police department. This unfortunate slang might actually increase the number of drunk drivers on the road. No doubt, they were channeling Katie Melua's Sailboat song where she sings, "If you were a piece of wood I'd nail you (to the floor)". 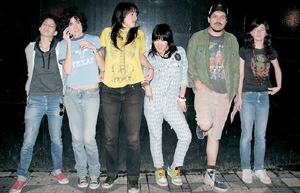 ♠ There haven't been a lot of horrible songs on XM recently, although Groove Armada's "I See You Baby, Shakin' Dat Ass" made a surprise reappearance last week. Other than that, the worst song I've heard is CSS's "Music is My Hot, Hot Sex"

. I'm guessing this song was written by either a meth-addicted chipmanzee or the lead singer of Tatu.

♠ Speaking of chimps, we're going to the Zoo on Saturday so various one-year-olds can experience the joys of wandering through the wafting aromas of elephant dung. We're also going to see who would win in a fight -- Ella or a lemur. 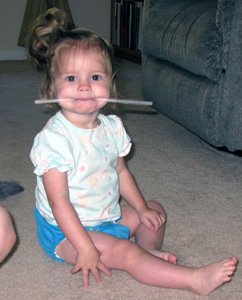 ♠ Ella is obviously in training to bcome a pissant middle schooler with a straw hanging out of her mouth. She has also learned that when a camera comes out, you should pause and pose until the flash goes off.

♠ My dentist's office could learn a thing or two about flashes, since it took them two tries with the panoramic X-Ray machine to get prints that weren't too dark to see. This is also after the three weeks of bureaucratic shuffling it took to set up the referral in the first place. As of yesterday, I now have a map of my teeth and a referral to get my wisdom teeth removed -- something I'll probably do in mid-July.

♠ Something YOU should do before mid-July is to vote for your favourite caption from this week's Caption Contest. One vote per person please -- all duplicate votes get reset using my high-tech wizardry! I can see you cheaters. 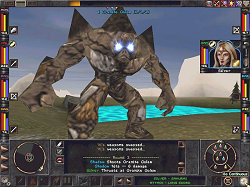 ♠ Wizardry 8 was such a boring game. I bought it during my first year in Tallahassee and lost interest roughly one week later. Sadly, the part of the game I enjoyed most was discovering that the music was just a bunch of MP3 files which I could swap out with my own. However, even the novelty of starting every quest with Sir Robin's theme

was not enough to make it a fun game.

♠ Speaking of games, I recently purchased a laptop to use up some Dell coupons. I got the Dell M1530 based on its reviews, as well as a graphics card that can run most of the games I would play while travelling (World of Warcraft, Snood, and Cosmopolitan Makeover: Barbie's Dream Salon). I figured it was about time that I jumped on the laptop bandwagon, and was also tired of writing up meeting minutes at work then typing them in later. Plus, now I can trash talk Mike on IM during games of Mario Kart. The laptop should get here sometime next week.

Bad guys get the most girls

School closed due to ninjas