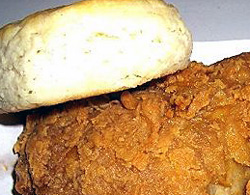 ♠ This week marked a break in a four-year tradition: Fridays are no longer Popeyes For Lunch days! The Cheers-esque franchise near my home where my order is always prepared as I walk up to the counter has the same meal discounted on Tuesdays. By going then, I pay $3.18 instead of $4.68 (a 32% savings!) which nets me about $70 a year. Some other cost-cutting measures I plan on employing include getting my car to run on tap water ($1440 a year) and feeding my cats carpet shavings instead of dry food ($100 a year).

♠ Speaking of cat feedings, Booty was a right bastard this morning, starting her breakfast routine at 3:30 AM instead of 5 AM and carrying on every twenty minutes. She tried to push a decorative mug off a shelf, knocked some CDs on the floor, and ate off the cover of Consumer Reports magazine (since she obviously disagreed with their reviews of pet insurance). I responded by putting her in a velcro suit and throwing her against my velcro wall where she hung plaintively until I was ready to wake up. 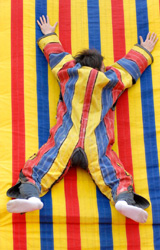 ♠ The velcro suit booth was always a popular attraction at any number of city/school fairs in Alexandria. When the uptight safety monitors weren't looking, we'd always try to run two or three people up at the same time because as everyone learns in high school, "Safety First" is for pansies.

♠ While cleaning out my house, I discovered a Safety Checklist that I distributed door-to-door in my neighbourhood to fulfill the requirements of the Safety merit badge. The checklist was about as useful as a Boy Scout pamphlet could be, with tips like "don't leave your baby in the bathtub" and "don't drop a bathtub on your baby". Luckily, the merit badge only required me to pass the checklist around -- I didn't actually have to follow up on the neighbours to make sure they weren't engaging in risky home repairs or swinger parties.

♠ I've been doing my Spring cleaning this week, rearranging furniture and discarding things that really don't need to be saved. Among the growing list of items: a 2003 map of DC, the literary review magazine from 7th grade (I was unpublished and undiscovered), a pair of size 36 shorts never worn, four pairs of socks with holes in them, three PCI modem cards, four sticks of RAM, four really slow OEM graphics cards, two dish towels, a stack of delivery menus, a bulletin board, a stack of "cold wash only" sweaters that shrank in the dryer, and Booty.

♠ This weekend marks round two of Jazz in the Garden, followed by an insane heat wave (97-100 degrees) that will keep me inside cleaning the basement and playing poker. I may mow the lawn on Sunday before it gets too hot -- alternately I'll set the air conditioner to a frigid 79 degrees and watch ALIAS all day long.

♠ Yesterday was also Rob Kelley's birthday. I haven't really kept track of people's brithdays this year because Facebook takes the fun out of birthday-stalking. However, Rob doesn't list his on Facebook anyhow, so I'm off the hook for missing it by one day. Happy Birthday!