World of Warcraft has a dirty little command, /played, that shows you how long you've been playing your character. Not a harmless measure like "You've been playing since 2004", but a down-to-the-minute tally of every single moment you've spent online. This command was obviously put into the game to embarass gamers by quantifying the amount of time they were NOT in the lab finding a cure for cancer or reading to underprivileged children in Ghana.

"It is a sobering thought, for example, that when Mozart was my age he had been dead for two years." - Tom Lehrer 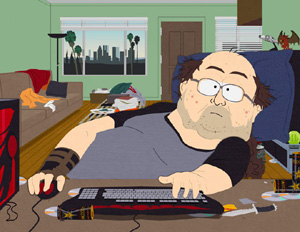 My main character has a /played time of 61 days, but when you add up all my other characters, the total comes to 119 days and 20 hours (or 2876 hours of my life). This doesn't even include the characters deleted after realizing for the tenth time that Paladins are too boring to level over 30, or Aukshunner, the level 1 alt who spent the first half of 2005 sitting in the auction house making millions as if that were a game within a game.

Had I spent all this time in useful and scholarly pursuits, I might have discovered the cure for both cancer AND radio stations that play Nickelback. However, this doesn't make me want to quit the game, and I don't consider it time wasted.

Alright, the time I turned my Druid into a seal and tried to circumnavigate the entire continent may have been wasted time. And the thirty deleted warriors who required less strategy to play than a game of Hungry Hungry Hippos were probably not cost-effective. And all the time spent Fishing, only to reach a skill level of 141/300. But OTHERWISE, I wouldn't classify Warcraft as a waste of time.

At the end of the day, the enjoyment and friendships gleaned from playing Warcraft are far more rewarding than sitting on the couch watching reruns of "George Lopez is a Comedian Not An Actor" or going to a loud bar and hanging around people who like to use "at the end of the day" in casual conversation.

And if we're completely honest with ourselves, 99% of us would never have used that time for anything useful anyhow.

Writing Tuesday on his blog . . . in almost all caps, West said he was offended that anyone would think he doesn't care about his fans