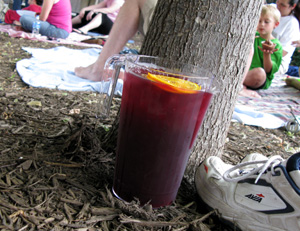 Friday night marked our first salvo into the weekly phenomenon that is Jazz in the Garden. Crowds streamed in various scales of fancy clothing depending on which lobbyist they worked for, and though they only had red sangria this year, it was just as tasty as last year. The jazz group was The Young Lions (who may have used that name instead of The Cubs so people wouldn't automatically think they sucked) and the genre was "jazz rock", which implied that the music had a recognizable beat and every female would think the bass player was hot because he looked like Lenny Kravitz.

At one point, they asked an audience member to come up and play three notes on the keyboard for an improvisational number, but the timid girl picked C, G, and high C, so the resulting tune sounded like any tune in the Chick Corea playbook. 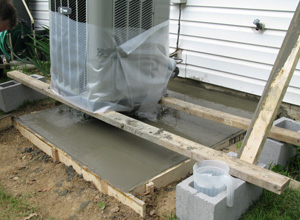 Despite the impending doom of thunderstorms, my dad and I laid concrete underneath my heat pump on Saturday. This job only took 1120 pounds of concrete bags, so we were actually able to drive around turns on the way home without slowing down to 1 mile per hour. With creative use of tarps, we were able to finish the job and keep it dry. This job also has the side effect of reducing the mowable area of my property by about 2 square feet. After concrete, I took a shower, had some wings, and played Warcraft all night long.

On Sunday, we went out to Front Royal for the First Birthday of Rebecca's cousin's daughter. It was ladybug-themed, from the cupcakes to the cakes to the decorations, and one guest brought a giant rideable plush ladybug that was amorously investigated by the dogs. After realizing that we had been in Front Royal twice in two weekends, we resolved that next weekend we would stay home and save the environment.

Last night for alcohol on the Tube sparks mayhem