♠ Work has been pretty busy this week, which might be why this week's entries are shorter than usual. Have you submitted your captions for Wednesday's Caption Contest yet? I rely on my readers to self-entertain in situations like this because I'm far too busy doing secret work and playing Mario Kart. 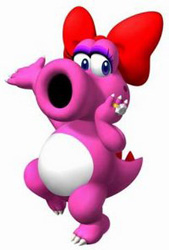 ♠ I unlocked Birdo in Mario Kart a couple days ago. Ms. BJ is a medium-weight driver that speaks purely in farty sounds, and is a perfect choice if you would rather play Mario Fart. She farts around turns, makes farting noises when she passes people, and farts despondently when you drive off a cliff. Definitely worth the price of unlocking.

♠ On the other hand, I have unlocked very little in Smash Brothers because the single-player mode is more boring than watching Gosford Park dubbed in Chinese. I can handle a simple task like "race 16 times", but when the task becomes "beat the fifteen minute long single-player mission with every character four times", I quickly lose interest in unlocking anything at all.

♠ Speaking of unlocking, up until my most recent bout of Spring Cleaning, I kept every key I'd ever owned on a keyring, from house keys when I was 5 to bike locks and padlocks throughout my childhood. I had more keys than a Fischer Price Toy Piano (10) but not as many as a baby grand. 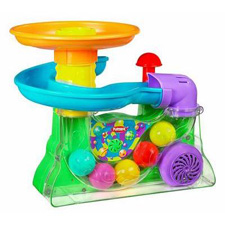 ♠ Speaking of babies and toys, baby toys are quite entertaining for adults, but not from the perspective you might think. Playing with baby toys as an adult is more about solving the puzzle of "What is the baby supposed to learn from this?" than enjoying the toy. All baby toys must be educational or at least fake it.

♠ This trend doesn't seem to continue into older childrens' toys. I don't think I learned a single thing from Castle Greyskull except that I would never be allowed to own the dungeon slime addon because "it was too messy". 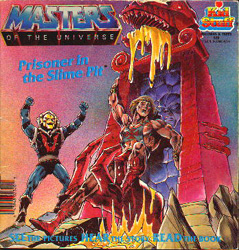 ♠ There was a time when I owned all the He-Man action figures. I used to bring the entire set to the day-sitter's house to play with, along with my complete set of Transformers. We never made them fight each other because that would be too genre-bursting for a neat kid such as myself.

♠ This weekend, I have Friday night dinner plans and then a hike up Mount Old Raggy Mountain on Saturday. Surprisingly, this is the first time I've ever gone there. The weekend is also filled with birthdays: Chris Smith on Saturday, then Rebecca and Brianne's on Sunday. Happy Birthday to all!

Chimps calm each other with hugs and kisses

How not to have an Olympic mascot nightmare