When a wimpy bird turns into a stud

Rebecca Safran has fooled Mother Nature. The evolutionary biologist from the University of Colorado figured out a way to give male barn swallows a makeover that makes less popular males much more desirable to females.

Ms. Safran has already sold the results of her research to ABC, who will market it in the Fall 2008 television line-up starring Ty Pennington. The FOX Network is rumoured to be developing their own show in tandem, Who Wants To Get Humped By This Bird?, which they say was independently inspired and produced.

About eight years ago, Safran expected to find that the length of a male barn swallow's tail feathers determined his level of success attracting mates and breeding. Instead, she noticed something she didn't expect: Female barn swallows tended to choose mates with the darkest breast feathers. Those males "bred a lot earlier, attracted the best mates and sired the greatest number of offspring," which Safran says is "the currency of evolution."

The results of this study are underwhelming, since everyone already knows that chicken breasts would be much more appealing with dark meat. This is why the thigh-leg basket often outsells the breast-wing basket at Popeyes. Researchers also discounted the notion that large numbers of children are the currency of evolution, since many families in American history had an upwards of twelve children, only to lose them all in tragic accidents involving a misplaced smallpox antigen, or covered wagons and alcohol.

Safran and her team tried 30 colors. Nothing worked until, she says, "we came across the Prisma nontoxic permanent ink art marker." The cost: $5.99. The light walnut shade seemed to match the darkest of the male barn swallow population. Applying a thin coat of the marker changed everything. Females flocked to the males with the darkened breast makeovers just as they did to the males with naturally dark breast feathers. 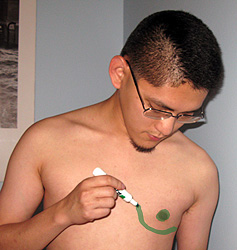 This experiment made me curious to see if the same principles would also apply to human beings. I attempted a self-test using an Expo Dry-Erase Marker (cost $1.09), choosing the colour green because I had no yellow markers. After accentuating my boobies with the marker, I went to the local mall and paraded up and down near a jewelry store. My personal experiment never reached fruition before I was arrested by mall security, but I remain convinced that Charles-Atlas-sized rewards await the company that successfully markets this to nerds, especially when learning about the side effects:

"Simply by changing a male's appearance, his physiology also changed," Safran said. "Males who were made darker lost weight. And their testosterone levels increased at a time in the season when testosterone is usually in decline." The weight loss may have to do with all that extra time they're spending with female birds. 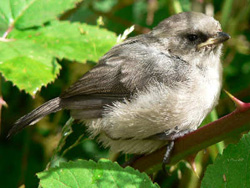 After the study, the makeover birds were rechristened as an homage to disgraced Governor Eliot Spitzer, who spent a little too much time with the females himself. The "Spitzer Swallows" are now celebrities in their own right and continue to get the lady birds. In the meantime, Ms. Safran (who was greatly impressed with my own experiment) theorized that painting the breasts of a politician might make him more electable. She has resolved to study bushtits next

The only unanswered question from this study is why it took eight years to reach a conclusion. Thirty colours over eight years works out to roughly one colour every three months. When asked about the padded schedule, the team replied, "It took us a while to realize that permanent markers are not conducive to repeatable experiments. Next time, we'll use tempera paints."