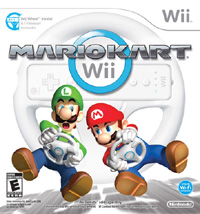 In my lifetime, I have played at least seven million games, some of them great and some of them horrible. Despite this, the number of games with enough appeal and lasting power to still be played over a year later can be counted on one hand, even if I were involved in a tragic industrial wood chipper incident: World of Warcraft, DOOM, Starcraft, and Super Mario Kart for the SNES. (Diablo II would be the runner-up finger that ended up in the mulch).

I played Super Mario Kart for years as a kid, and it was one of the only games I was actually good at for quite some time, but was greatly disappointed with the version for the N64. Because of this background, Mario Kart Wii had a massive sense of nostalgia to live up to.

The game comes with a plastic shell that wraps around your Wiimote and turns it into a very responsive steering wheel. It's very intuitive for new users, but may lead to hilariously bad crashes for people with an old control scheme embedded in their reflexes. Up to four players can play locally (though any more than 2 will require a huge TV screen to see anything), and 2 local players can play online with 10 others. 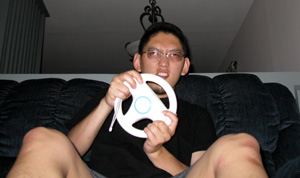 Final Grade:
B+, best with friends

Rehab is for quitters

Key to all optical illusions discovered

Georgia seeks to change its border