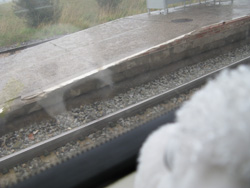 Friday was a cold and rainy day, once again the perfect time to be on a train. After some more quiches, we bundled onto a 10:35 Regional train (a designation which means that the train will stop in every single backwater town along the way to Barcelona, and not arrive there until around 3 PM.

Because this was the first big travel weekend of the travel season, it was much harder to find an affordable hotel in downtown Barcelona. After several "sorry, we're full" emails before our trip, we finally scored a last-minute reservation at the Husa Via Barcelona in a suburb several miles from downtown. It was so last minute that when we printed maps of all our hotels, we didn't realize that the printer had run out of paper before Barcelona. To make matters worse, no one in the Tourism Booth at the train station had ever heard of it, and everyone spoke Catalon instead of proper Spanish.

We tackled this problem head on by just taking the Metro out to the suburb, Saint Joan Despi, and asking people in the city. After two or three miles of walking around the entire city based on faulty directions from a local who was either clueless or vindicative, we found a swank hotel with a helpful clerk who had a map of the city and circled our hotel. So, we spent the first afternoon in Spain on a complete walking tour of our entire suburb, which was fairly normal, and much more modern than France. 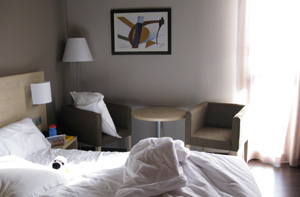 To make up for this detour, our cheap hotel turned out to be a super-swank chain -- the type that rich, retired Americans probably go to when they want to experience Spain without getting dirty. The rooms were huge, included satellite TV and a bidet, and surpassed anything the Mariott corporation might have thrown at us. To relax after our long hike with all our bags on us (thank goodness for packing light), we opted to stay in the suburbs this evening rather than go into Barcelona proper.

We wandered through several fun markets and shops in search of dinner and wine to take back to our plush accomodations, but the only wine available here came in tiny boxes. It tasted just fine though, and after exploiting the giant bath tub for cleanliness' sake, we were soon asleep while it rained all night long.

Saturday was summarized by this months' 12 of 12 entry

and started with the 8 block walk from our hotel to the train station, followed by a thirty minute train ride into the city. 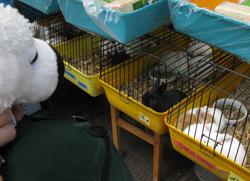 Dumped out at the Placa Catalunya, we wandered down Las Ramblas -- the wide market-y thoroughfare that runs for two miles out to the sea. The clusters of merchants on this stretch are grouped into categories, starting with pets for sale, followed by street performers dressed up as statues, flowers, and ending with artists. We also narrowly avoided an overweight middle-aged clown who tried to hug us and may have been a pedophile.

After some rambling, we ducked into one of the many narrow allies off the Ramblas and made our way to the Cathedral of Santa Eulalia, Barcelona's star church which turned out to be closed for renovations. While the construction was in progress, the entire facade of the church was covered with a gigantic silk screen that showed the church as it was supposed to appear (similar in design to those T-shirts with the naked lady bodies printed on the front). Walking through the area was enjoyable despite the prevalence of modern stores, and a variety of street musicians could be found everywhere. Some played strange UFO-shaped instruments that seemed like convex steel drums. 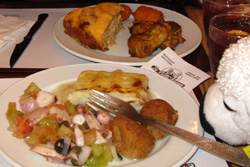 For lunch we found a great deal on tapas and sangria at La Porta Fermissa. I was a little disappointed by tapas, since I was expecting a particular delicacy like crepes or shepherd's pie. Instead, I found that tapas just meant "snacks" and could be anything from chicken wings to tuna omelettes. After getting over my lexiconal disappointment, I found the food to be quite tasty anyhow, even the cold octopus salad.

After lunch we did several more miles of walking -- we probably should have taken the Metro, but it was a beautiful day. We walked up to see the Casa Battlo and the Casa Mila, two buildings built by the famed architect, Gaudi. The latter had long lines, so we decided to come back later. Next we walked to the Sagrada Familia, which is Catalon for "Big-Assed Incomplete Church of Ridiculous Height" and took the tour. At first glance, it's pretty awe-inspiring, but when you get inside and learn that it's only 60% of its final height (and that there will be a giant cross the size of a zeppelin on top), it's just plain silly. 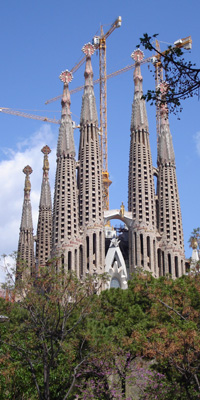 Big-assed church was followed by ice cream in the park, and then a Metro ride to Parc Guell overlooking the city from the west. The park was a very pleasant location, although a bit underwhelming since we expected there to be Gaudi sculptures all over the park, rather than just the central pavilion. We got to listen to a digeridoo band, a lazy horrible trumpet player sitting on a bench, and a violinist playing Carmen to a karaoke CD. After reaching the highest point in the park, we also took a picture of Barcelona's penis building, which is covered in LED lights that light up a million different ways.

We returned to the Ramblas for a dinner of paella and beers, and then picked up some groceries at a modern mega-mart across the street. The store was about to close and the crowds inside were ridiculous -- we almost expected to encounter a hurricane based on how bare the shelves were and how long it took us to check out. After a quick stop in Burger King for free toilet usage, we took our forty minute train back to Saint Joan Despi. The walk back to Husa was slightly seedy, but we were accompanied by several other train-patrons in the worst parts near the station. We arrived home around midnight and stumbled into bed. 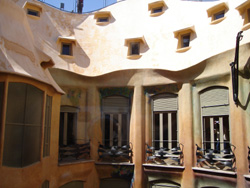 After getting Rebecca a coffee so she would stop falling asleep everywhere, we got in line for the Casa Mila, one of Gaudi's apartment buildings containing a mock 1920s apartment and several levels of museum exhibits. The tour was a fun affair, although we made the mistake of taking the stairs to the top rather than waiting in line for the lift. From the outside, this building most closely resembled an Oompa-Loompa hut, and the chimney decorations on the roof looked like stormtrooper heads on pikes.

On the ground floor was a special exhibit on Zora Music, which I thought would be fun and musical, but Zora Music turned out to be a Holocaust survivor who mainly drew piles of dead bodies stacked up (five hallways full of them). 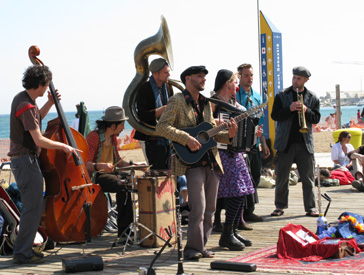 We passed a bass trumpeter playing Nesse Dorma in the Metro, and then rode to Barceloneta (the seaside, rougher area of Barcelona). We had sandwiches on a real live Mediterranean beach (complete with bikini-clad volleyball players despite the chilly wind) and then walked along the boardwalk listening to accordian players and mariachi combos. Seeing a crowd in the distance, we ambled over and found the musical group, GADJO, performing a free concert. Their music was quirky (a mix of accordian, guitar, sousaphone, bass, drums, and various swappable woodwinds that channeled The Cardigans, 586, and the soundtrack from Quest for Glory IV) and we even purchased one of their CDs to listen to back home.

By this point in the trip, all the churches were running together. However, the Chocolate Museum was closed on Sundays, so we drank wine in the courtyard of Santa Maria del Mar and then wandered inside after services were over. It was pretty enough, but no Sacre-Coeur. For dinner, we had more paella and sangria, and then took the Metro to Montjuic to see the dazzling fountain/lights show that everyone raves about. Sadly, April 13 is still considered to be off-season, during which the show only occurs on Fridays and Saturdays.

You can view the Barcelona pictures here

Women should try a bite, too: Eating penis is good for the skin, apparently.

Rodriguez ran for an exit, slipped and hit his head on a metal flatbed cart