Day Three of our adventure began with a bum knee -- my own. It started hurting halfway through day two, but I merely attributed it to being out of practice with walking extended distances (besides, in Warcraft, you can turn on auto-run and forget about it). By today, it was obvious that I had sprained a joint or something in my right knee, even though there was no specific event that triggered it, like a fall down the Wellington Arch or getting kicked by a midget. For the next week and a half or so, I walked in various states of cripply goodness, and on this last day in London, I was forced to walk with my right leg completely straight, no doubt looking like a modern American peglegged pirate and greatly embarassing my travelmate. 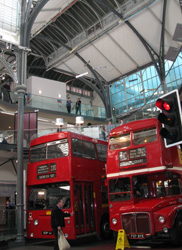 However, I refused to let a gimp knee ruin the vacation, so we did even MORE walking than the previous days as a nice F-U to the frailties of the human body. We wandered through a market near the Charing Cross Tube station and then toured the British Transport Museum, which (amazingly) was the first and ONLY tourist attraction we actually paid for in London. This museum was great, detailing the evolution of transportation in London from the city's origins, including boats, horses, carriages, trains, the Tube, and the double-decker buses. It took us about three hours to look at all the exhibits and mess around with the hands-on stuff. We also tried to hit the Theatre Museum, but it had moved to the other end of the city. 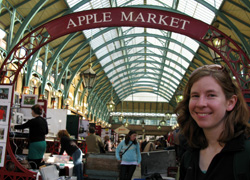 After a morning of touring, we had a fresh hand-tossed pizza made by a genuine Italian in the market and then started a new walking tour, crisscrossing the Thames multiple times via the Waterloo Bridge, Blackfriar's Bridge, and the Millenium Pedestrian Bridge. We stumbled into a free showing of David Noton's travel photography

in the Oxo Tower, browsed used books in an outdoor used book lot, and took pictures of St. Paul's Cathedral and the London Bridge. We never made it out to the Tower of London, but were quite happy with the things we did see.

In the evening, we went to Hyde Park and wandered around, but the chill meant that few people were out and about. We did get interviewed by a couple of foreign film students who were trying to gauge peoples' first impressions of their countries (Columbia = DRUGS), and then walked back to our neighbourhood near Victoria Station for giant pub burgers at the Marquis of Westminster. Following pints of London Pride and the strains of Morrissey over the radio, we grabbed some newspapers and returned to the hotel for an early night in. 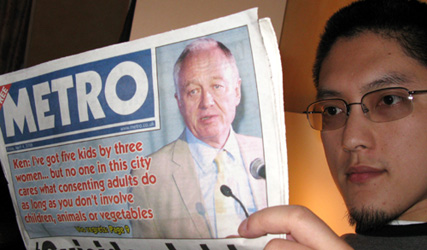 London is inundated with free newspapers and minorities at every Tube station trying to hand out as many as possible. One of the papers that everyone reads is the Metro, a paper that is already slightly famous on this website for the number of funny news links it provides (including these two classics with excellent supporting graphics and captions

). Reading it in London was as exciting as any museum tour, and almost like meeting an old friend for the very first time. After catching up with the current whereabouts of Victoria Beckham (in a mall), and happily reading nothing at all about Obama and Clinton, we hit the sack, ready to tackle our next city. 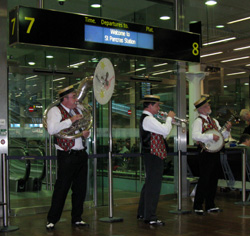 The next morning, we took the high-speed train from London to Paris in a mere two and a half hours (though we were greatly tantalized by the direct train to Euro Disneyland, complete with a welcoming band in the station playing Disney tunes). Because the train travelled at 186 miles per hour, we didn't see much in the way of scenery, but we did enjoy a swank first-class cabin (if you are over 26, you MUST ride first-class). The train dumped us at Gare du Nord and we immediately took the Metro to our hotel in the 20th district. Having just come from the Tube, the Paris Metro was smelly and crowded, and the tickets were way too tiny and easy to confuse with used tickets. At some of the transfer stations, you easily walk a half mile underground, to the point where it was more efficient to just walk the six blocks above ground rather than try to catch another train.

This was my opportunity to put my high school French to good use (now 13 years outdated), and if they didn't understand me, I figured I could just fall back on Alizee lyrics and maybe do the Alizee/Night Elf dance as a distraction

. This was more important in our hotel district, which was off the beaten tourist path, so fewer residents spoke English. We survived our initial move-in though, getting a cozy and clean room by an old-fashioned elevator that can barely fit a single American buttock, and then had giant Greek sandwiches at a little Iranian deli around the corner. Ordering here was much more frantic, but the waitress (who spoke no English at all) took pity on us and made sure we had everything we needed. 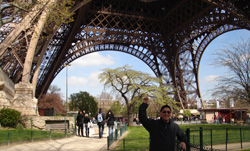 With food in our bellies, we decided that the first thing to see in Paris would be the Eiffel Tower. It was an unseasonably warm day, and billions of tourists were there, but we got to the second level after only a thirty minute wait (which seriously made us feel like we were at King's Dominion). The very top floor was closed because of high winds, but we could see plenty from where we were. Paris is pretty impressive from above, except for the ridculously ugly Montparnasse Building which ruins the scenic skyline. 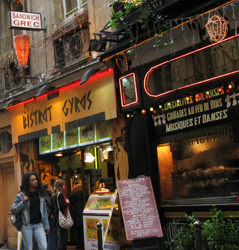 The afternoon was spent having ice cream in the park, getting accosted by all manner of merchants and sketch artists, getting lost on the Metro and ending up on one of the suburban RER trains (it turns out they're pretty much the same as normal Metro trains except the seats are more comfy) and then stumbling into the Latin Quarter. This neighbourhood was a maze of tiny streets and millions of restaraunteurs trying to convince us to eat dinner, with crepe makers, beggars, and all manner of people crowded together. 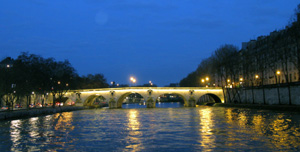 Later, we got drinks near the Sorbonne, paying far too much for our wine (12 euros for two glasses, when a bottle in a local supermarket costs 2 - 6 euros) and regretting it afterwards. This was one of only two bad deals on the trip though, and it was fun to crowd into a cafe and people-watch. 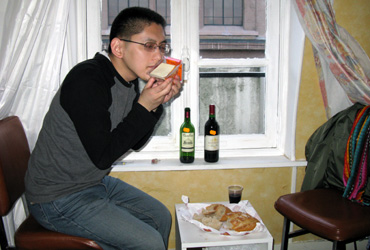 As night fell, so did the temperature, and our unseasonable warmth vanished for the remainder of our Paris sojourn. For kicks, we decided to take a night tour of Paris from a river boat, and enjoyed the sights in spite of the frigid winds. The French keep the Eiffel Tower lit up all night long which looks mildly corny, but this is exacerbated by the timed glitter effects -- every few minutes, the lights start flickering and blinking like an out of control Las Vegas floor show. When the boat stopped an hour later, we were thoroughly frozen, and returned to our hotel district. We wandered into a local grocery store a bought a bottle of wine, some cheese, some bread, and a corkscrew for a mere 8 euros ($12) total and then retired to our room for a late dinner and a showing of Les Simpsons

Do you have any questions about our trip? Things I've forgotten to mention? Let me know in the Comments section!

Citizen issues a parking ticket to a cop