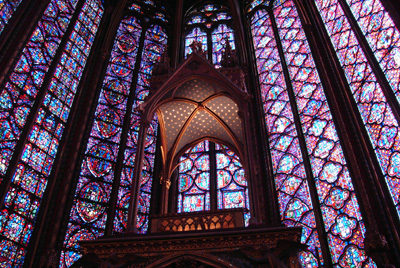 Although it couldn't be mistaken as the summertime, the first four days of our trip had been fairly nice for April in countries on the same latitude as Maine. This all ended on Day Five, when the damned Norwegians sent a subversive cold front across the area, mixed with clouds and light drizzle. Based on the weather and the amount of logistics it would take to schedule trains to the Palace of Versailles, we decided to skip it, and started today off by making train reservations for the end of our Paris trip. With that taken care of, we hit Ile de la Cit?, the island in the middle of the Seine containing Saint-Chapelle and Notre Dame.

Both were beautiful and very typical of the Parisian atmosphere -- where London was charming and slightly modern, everything about Paris exuded age and foreign history. More important than the churches, though, was the crepe maker in the Latin Quarter where we had a crepe with ham, egg, cheese, and mushrooms. Because prices are slightly higher if you sit down in a shop, we ate ours in front of the building, huddled over it for warmth. The crepe was so delicious that we also shared a second one, filled with nothing but steaming Nutella chocolate spread.

Our next stop was the Catacombs, and a forty minute Metro ride later found us in front of a big FERME POUR TRAVAIL sign -- evidently some of the bones needed repairs or something. By now, we were sick of riding the Metro for hours on end. I almost wanted to take the ORLY? bus for giggles

, but instead we decided to wander the neighbourhood in search of something cool and undiscovered (maybe a French Surgery museum?). 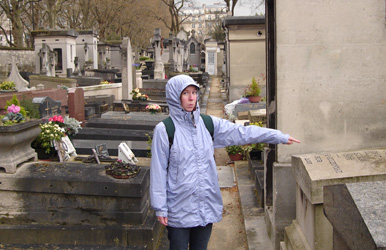 Instead of a museum, we stumbled into the Montparnasse Cemetary

, miles and miles of dead people in the shadow of the monolithic Montparnasse Building Pimple. A small sign listed the famous people buried there, including Camille Saint-Saens (lot 13) and Cesar Franck (lot 26), so we decided to try finding their graves for kicks. Unfortunately, the signs neglected to mention that each lot contained hundreds of graves, and after limping around for a bit, I gave up. We took pictures of ourselves pointing at random graves anyhow, so twenty years from now (when everyone has forgotten about it), we can claim that we DID find these famous bodies. 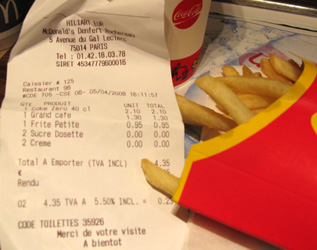 By now we were freezing our derrieres off, so we slipped into the cheapest place possible to warm up: the local MacDo. For the cost of a coffee (and a frite petite) we got an hour of warmth and the secret code to punch into the keypad-protected bathrooms. MacDonald's has established a pretty big foothold in Europe -- we saw 3 in the small parts of Paris we visited, and 2 on the same road in Barcelona. There were also Burger Kings and KFC's but (sadly) no Popeyes.

From our cozy booth in the back, we worked out a new plan for the afternoon involving the Sacre-Coeur church on the north side of town. This beautiful church had one point against it -- it required me to hobble up one hundred yards of steps to reach. On the plus side, it was nestled right next to Paris' red-light district, so if we accidentally got lost, I might see some boobies. After admiring the church inside and out, we wandered through the neighbourhood and warmed up with another chocolate crepe.

The cold essentially wiped us out, so we went home to the Hotel Charma for another wine/bread/cheese dinner. This time we tried a local Brie which was excellent.

It was another cold and windy day during which I mastered the art of being a cripple without looking like a giant sashaying retard. Despite the cold, we were excited because many museums and exhibits are free on the first Sunday of the month, and we are genetically cheap people. 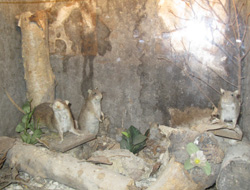 Our first stop for the day was going to be the Tour of the Sewers, something which Paris has always been famous for. Enroute, we passed a Marathon being run through the city (and two marathon runners on the Metro who were blatantly cheating), the Palace of Tokyo (which looked very Japanese, especially with the giant Maglev car on top), and the Mus?e du quais Branly which I only remembered because it's pronounced like French dukee (poop).

The Sewer Tour took us on a winding course through actual sewers, crossing shaking metal platforms over goopy brown stormwater and past mock terrariums with fake sewer rats. The actual information was in both English and French and was quite interesting, though Rebecca had her shirt covering her nose by the halfway point. At the end, they had a short video about the Paris Night Shift, a group of people you can call 24 hours a day when you lose something in a sewer hole (one lady dropped her car keys in a storm drain, and another guy flushed a necklace down the toilet). In the gift shop, you could buy a giant stuffed sewer rat -- I almost bought it for Ella because it would be funny and subversive for her to love a sewer rat, but it was 14 euros ($21).

The next stop was the Rodin Museum, which was interesting enough, but I'm glad we went on the day it was free. The big Thinker sculpture was roped off with a fifty yard radius, so we couldn't take any silly Thinking pictures. Seeing so many sculptures did make us hungry though, but there are no quick eateries near the place. What should have been a quick search for a restaurant took us a mile away back into the Latin Quarter, past a shop that sells Assouline and a large police-escorted group of roller skaters skating for some disease.

We ended up eating "Cheesy English" sandwiches at a sandwich shop called Cosi (no relation to the American one), and then enjoyed the ambience of the Ile de Saint Louis, a quiet mostly-tourist-free island of shops and houses near the Notre Dame (it also featured an accordian player whose shtick was pretending to be headless). 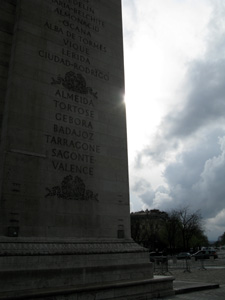 Our last stop in Paris was going to be a walk up the Champs-Elysee to the Arc de Triomphe. We were going to time it so we could be on top as the sun set, but the frigid temperatures convinced us that it would be just as good at 5 PM as it might have been at 9. And, instead of walking the full length of the road from the Louvre, we decided to pop out of the Metro about four blocks away from it.

The Arc was definitely an impressive site, surrounded by a giant traffic circle and bisected by 12 separate avenues. Seven Corners in Falls Church, Virginia has nothing on this place -- we'll have to build a Thirteen Corners just to one-up it. Unfortunately, we discovered that Rick Steves lied when he said that going up the Arc was free on the first Sunday, so we just admired it from below instead of paying what seemed to be an exorbitant price.

After this, we felt we had seen and enoyed most of the parts of Paris that we would enjoy (we're not big art museum fans) and were getting tired of the constant crowds, the cold, and the way that taking the Metro always felt like an hour-long scavenger hunt. We returned to our lovely Hotel on the outskirts of town and made one last trip to our grocery store for tomorrow's breakfast, and then packed our bags and bundled up for the night. Tomorrow, we would flee the big cities and enjoy the (hopefully) moderate temperatures in the south of France!

. Some of them have already made an appearance on Facebook, but there are plenty of new ones!